Park La Brea residents had a mixed reaction when they first heard of the Town and Country project, which aims to build a mixed-use building at the southeast corner of Third and Fairfax avenues, said retired Army Col. Donald Harris, secretary-treasurer of the Park La Brea Residents Association. The original idea was to build a tower that would reach more than 20 stories tall at the northwest corner of Park La Brea. 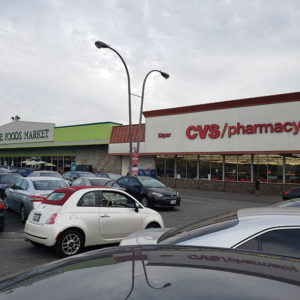 A planned mixed-use building at the intersection of Third and Fairfax aims to keep Whole Foods and CVS while constructing 331 apartments. (photo by Cameron Kiszla)

“That massive building would’ve blocked light and air to a whole subduction of our Park La Brea community,” Harris said.

But Harris said the developers, the Holland Partner Group and Regency Centers, won over some doubters when they came back earlier this year with a plan for an eight-story building.

The project, which will include 331 apartments, more than 147,000 square feet of retail space and two levels of subterranean parking, will be an asset to the area of Third and Fairfax, Harris said. The plan is to keep the existing Whole Foods and CVS and bring in new retailers while increasing the green space and walking areas, which Harris said will add to the shopping environment on some of the other corners of the intersection.

“We, as the Park La Brea Residents Association, feel as the overall project will be an improvement to the community by providing new shops and services and will complement the original Farmers Market and the Grove Complex,” he said.

But not everyone is a fan. Harris said he’s heard a few Park La Brea residents, especially those nearest the development, are concerned about pollution, noise and traffic arising from construction and the project, issues that have been echoed by some parents and staff at the adjacent Hancock Park Elementary School.

Los Angeles Unified School District employees are limited in what they can say to the press, but Shanon Trygstad, who serves as president of the Friends of Hancock Park School, said demolishing the existing buildings might release pollutants into the air that the students breathe, and emissions from the construction equipment could be harmful as well.

In addition, she’s worried about increasing the number of cars in the area. The streets around Hancock Park Elementary are already “beyond a traffic jam” in the mornings, she said, and the noise from construction vehicles, as well as from the demolition and construction, could be distracting for students, especially those with autism and other special needs children, she said.

“It’s just feet from the school campus where the kids are playing every day,” she said.

Trysgstad and other representatives from Hancock Park Elementary, as well as area businesses, residents, members of the Mid City West Community Council and other stakeholders, have been meeting at a working group hosted by Councilman David Ryu, 4th District, to work out some of the issues surrounding the development and advise him about their concerns.

Mark Pampanin, Ryu’s spokesman, said the councilman is working to “facilitate a conversation between the developer and community stakeholders that is productive and positive, leading to real solutions and options. His goal is to reach consensus on a site design that improves the property, provides community benefits and minimizes impacts, especially to Hancock Park Elementary School during construction and after.”

Emma Howard, a senior planner with Ryu’s office, said the project is currently going through the environmental review process, and a scoping meeting was held last week.

“The goal here is we’d like to get a well-designed project where everyone feels safe during the construction,” Howard said.

While Ryu’s group is letting Trygstad voice her concerns, she said she’s not sure it will actually lead to change from the developers.

“They won’t really agree to anything. They just keep saying they hear us,” she said.

However, Tom Warren, executive managing director for Holland Partner Group, said the feedback from the community, and specifically Hancock Park Elementary, has already made a difference. It was because of requests from parents at the school that the project was lowered to eight stories, and the developers “expect to continue making adjustments throughout the process.”

“Going forward, we’re committed to maintaining this collaborative approach and active cadence of communication with the ultimate priority of delivering a project that not only fits in but enhances the surrounding neighborhood,” he said.