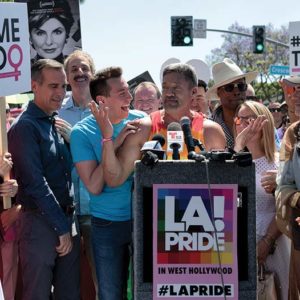 Duran, pictured at last year’s Pride, was removed from a City Council subcommittee that works with Christopher Street West to plan each year’s Pride celebration. (photo by John Viscott/courtesy of the city of West Hollywood)

Duran was removed from the subcommittee, which also includes Mayor John D’Amico, at the last meeting following accusations of sexual harassment against Duran from Gay Men’s Chorus members. City Attorney Mike Jenkins said a formal censure of Duran over the recent allegations will be on the council’s April 1 agenda.

Estevan Montemayor, the board president of Christopher Street West, said this year’s Pride, scheduled for June 8-9, with a free kickoff event on June 7, is “focusing on uniting our community.”

“Moving to a full street closure is very expensive for the city, it’s very impactful for the residents and the businesses,” Heilman said. “I’m not necessarily convinced we should be doing this going forward, on a long-term basis, but certainly this year it makes sense since the park is still not going to be fully open.”

The configuration of the weekend’s events could also c Pridehange to expand east of Santa Monica Boulevard.

“I think if you’re really about uniting the community you need to come up with a better urban idea,” D’Amico.

Headliners for this year’s 49th annual Pride are pop singer Meghan Trainor on June 8 and English synth-pop band Years & Years on June 9. Under the proposal, Santa Monica Boulevard, between Robertson and San Vicente Boulevard, would be free and open to the public with exhibitors, nonprofits and local artists, including an art installation honoring the 50th anniversary of the Stonewall riots.

“What we’re trying to do this year is experiment with something that can help us build toward a 50th anniversary of Pride next year that takes into account everything I’m sure we want to do for such a milestone anniversary,” Councilwoman Lindsey Horvath said. “Hopefully we’re building toward that and this is something that will help us learn from and plan for next year as well.”