Olympic challenge ahead for Ron Tutor

In the early 1980s, mega-developer Ron Tutor and his firm, the Tutor-Saliba Corporation, built a new international terminal at LAX in time for the 1984 Olympic Games. 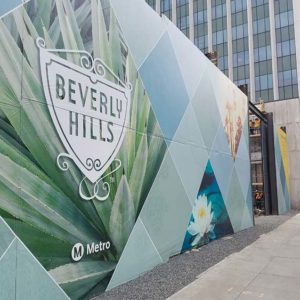 Metro subway construction is taking place in Beverly Hills, with the goal of completing the downtown-to-Westwood extension for the Olympics. (photo by Cameron Kiszla)

Tutor’s company and its subsidiary, Frontier-Kemper, were awarded more than $3 billion in contracts to handle the middle and final portions of the 9-mile subway that is expected to shorten the travel time between downtown and Westwood to less than half an hour. The total project cost is expected to be approximately $8.2 billion.

Barring delays, that should provide plenty of time for the subway to get up and running before the 2028 Summer Olympics return to Los Angeles, and Tutor said he thinks his company can meet the deadline despite the “inherent pressure” of a coming Olympics.

“As we speak, I see no reason why that can’t be accomplished,” he said.

Tutor is no stranger to large-scale construction in general and railway construction in particular. Tutor Perini was hired to work on the state’s high-speed rail system, and the firm’s website, TutorPerini.com, also lists rail projects in New York City, Seattle, the Bay Area and Boston.

Locally, Tutor built a large portion of the existing subway system ­– including the Red Line running between downtown and North Hollywood ­– and a dozen stations.

“This is really a continuation of 20 years of building subway tunnels and stations in Los Angeles,” Tutor said.

But for many years, Tutor didn’t work on the L.A. subway system. Instead, he was embroiled in what he called a “very nasty” legal battle with Metro that dragged on for more than 15 years.

At the heart of the dispute was millions of dollars Tutor said he was owed for work done on the subway in the 1990s. He sued Metro in 1995 and initially lost, but the case was overturned on appeal. Metro countersued but dropped its lawsuit in 2010, and Tutor said he ultimately emerged victorious and was awarded the money owed him.

In the time he was not involved with subway projects, Tutor said the Metro has become much easier to work with because of a “totally different management approach.”

“I believe that the L.A. subway system and the MTA have evolved to the point where they’re one of the best public agencies to work for in the United States,” he said.

For Phase II of the Purple Line Extension, construction has already begun on the Century City station, and utilities relocation for the Wilshire-Rodeo station has started. Additionally, the building that was at the station’s entrance at Wilshire Boulevard and South Reeves Drive has been demolished, and Tutor said the actual tunneling will begin later this year or early next year.

Tutor said he expects physical work to begin on the third and final phase of the Purple Line Extension in the summer of 2020 after approximately a year of design and engineering work. That schedule will allow the project to be done before the Opening Ceremonies on July 21, 2028.

“It’s just a commitment that, as a company, we will meet,” Tutor said.