Sundance film “The Boy Who Harnessed the Wind” might be the passion project of freshmen director and veteran actor Chiwetel Ejiofor, but it’s anything but amateur entertainment for two hours. No need for white saviors or naive statements about an African nation’s growing unrest in adaptation of the book by William Kamkwamba and Bryan Mealer based on a true story – just a compelling story set amidst unfamiliar settings for the more privileged Netflix subscribers. 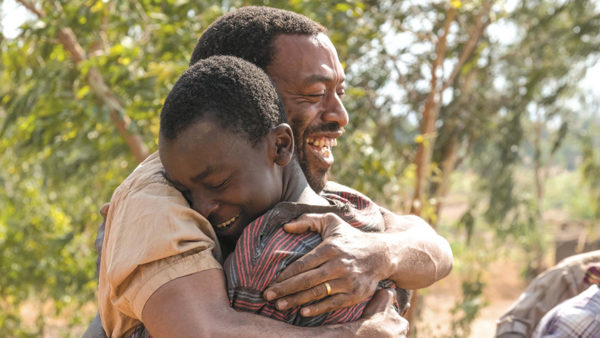 Chiwetel Ejiofor (left) and Maxwell Simba star in “The Boy Who Harnessed the Wind,” a poignant film about family struggles and geopolitical forces in Africa. (photo courtesy of Netflix)

Malawian boy William Kamkwamba (Maxwell Simba) merely wishes to attend school, socialize with friends and continue his side project of fixing radios for neighbors. Even before any major turmoil begins, times are rough for his family. Payments for school are late and a recent family death prompts lingering insecurities in father Trywell (Ejiofor), especially considering his fitness to care for land and turn a profit.

Then things worsen. The mid-2000s usher in wretched weather in the village of Kasungu, first flooding all crops before a full-on famine renders any fields without access to well water dry and barren. Starvation and riots soon follow, as young William’s family must survive nationwide food shortages, exacerbated by government denial of any crisis, and subsequent anguish felt by the entire family.

William might have a solution, one inspired by his studies, but his father might be too overcome with grief and stress to hear any new solutions.

“The Boy” is both a simple story of overcoming impossible odds and a geopolitical exploration. The first hints of William’s plan don’t arrive until more than 40 minutes into the film, but the growing tension in his family and the town he won’t leave gradually emerges much earlier. Rather than rely on cheap melodramatic tricks (leave that trash to “Green Book”), “The Boy” takes its time, building fully realized characters amidst a complex national setting. 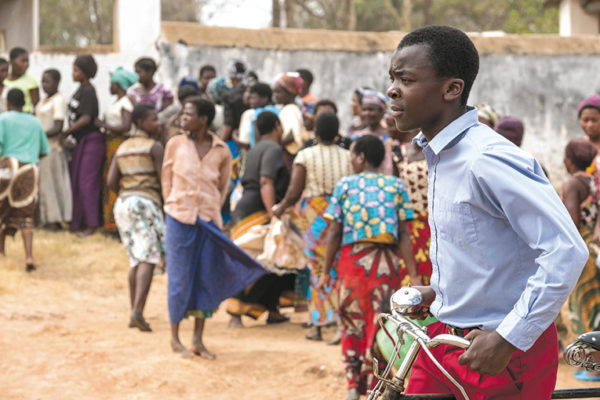 Maxwell Simba portrays William Kamkwamba, who endures the challenges of growing up in a tumultuous environment in “The Boy Who Harnessed the Wind.” (photo courtesy of Netflix)

Ejiofor, as Trywell, is of particular importance as the film’s co-lead. Never merely the arrogant patriarch, he feels the weight of his family’s dire situation, never finding an effective solution.

The Kamkwamba family experiences theft, government corruption and even division as sister Annie (Lily Banda) debates her own future. One of the most gut-wrenching scenes belongs to mother Agnes (Aïssa Maïga) following a family discussion regarding which sole meal a day they wish to have, since they can’t afford all three.

“The Boy” features an impressive cast of talent, including first-time performances by Banda and Simba. But the primary reason this film happened is Ejiofor, the biggest name behind it, along with a team of producers whose credits are all quite impressive.

Ejiofor entered British film and television in the mid-1990s, eventually shining as the Operative in 2005’s “Serenity.” His performance as a striking villain tops many lists. Since then, he’s appeared in notable works from “Children of Men” and “Salt” to “The Martian” and “Doctor Strange.” And he rightfully earned a nomination for his leading role in “12 Years a Slave.” Now, as a director, screenwriter and co-star in “The Boy,” he moves his career into exciting new territory.

“The Boy” won’t be remembered as one of the year’s best, but it serves as a promising entrance into storytelling for an actor known for countless memorable characters. While his future remains promising, this is hardly a passing affair. He finds a way to depict difficult subject matter without succumbing to exploitative victimizing or oversimplification with a Hallmark conclusion.

“The Boy Who Harnessed the Wind” is a heroic feat, both in its concept and production. It requires respect and a serious viewing, if for no other reason than to praise its titular star, William Kamkwamba, featured in another documentary and as a presenter at TED.