The Mid City West Community Council approved a resolution to support a study of the safety issues caused by the Fairfax Asterisk, where Fairfax Avenue converges with San Vicente and Olympic boulevards. 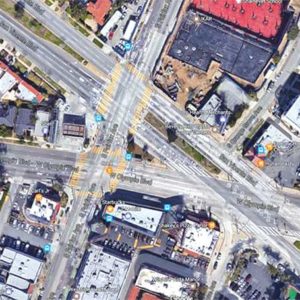 Residents have long been concerned about the traffic and pedestrian safety issues caused by the intersection where Fairfax, Olympic and San Vicente meet. (photo courtesy of the Fix the Fairfax Asterisk Facebook page)

The intersection has long drawn the ire of residents for the difficulties it creates for pedestrians crossing the street and the congestion of traffic. A Facebook group called Fix the Fairfax Asterisk emerged in recent years to draw attention to residents’ concerns.

“There are a lot of concerns about safety,” Mid City West Chairman Scott Epstein said of the intersection, adding that L.A. City Hall would ultimately have to carry out the study and figure out ways to make it safer. “We want to support that effort.”

The six-way intersection, roughly shaped like an asterisk when viewed from above, also converges the Los Angeles City Council districts of Paul Koretz, David Ryu and Herb Wesson.

The Fairfax Asterisk is not identified by the Los Angeles Department of Transportation as part of the city’s high injury network of streets, although surrounding streets including Pico, Venice, La Cienega and Wilshire boulevards, along with Sixth Street, have that designation. The city of Los Angeles adopted a Vision Zero plan to eliminate traffic fatalities by 2025. Improvements have been made citywide, including continental crosswalks, high-visibility crosswalks and intersection tightening to make crossings easier. No Vision Zero initiatives so far have targeted the Fairfax Asterisk, according to a map of completed projects from the Department of Transportation.