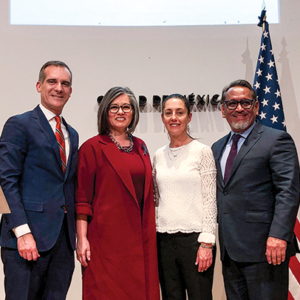 During their meeting at the Antiguo Palacio del Ayuntamiento in Mexico City, the two leaders also discussed opportunities for collaboration and exchange around climate change and sustainability, transportation, gender equity, culture and inclusion over the next year.

“Our 50 years as sister cities have shown that when local communities work together, we have the power to make real progress on everything from trade and tourism to transportation and technology,” Garcetti said. “I know that Los Angeles and Mexico City will remain leaders in confronting climate change, creating green jobs, improving resilience against natural disasters and building a future of sustainability and prosperity for everyone who calls our cities home.”

Sheinbaum said the 50th anniversary of sisterhood would be commemorated with “activities that will unite our cities even more.”

“In particular, we are interested in the work that Mayor Garcetti is doing on climate issues, as well as issues of interculturality, human rights and migration. We’re going to create celebrations this year in Mexico City that are dedicated to our friendship with Los Angeles,” she said.

As part of the sister cities anniversary celebration, L.A. and Mexico City will host a series of cultural events in both cities including a film festival featuring Mexican, Chicano and Angeleno film productions, a mural unveiling at the Mexican Consulate in Los Angeles and technical exchanges revolving around clean technology, sustainable mobility and resilience.