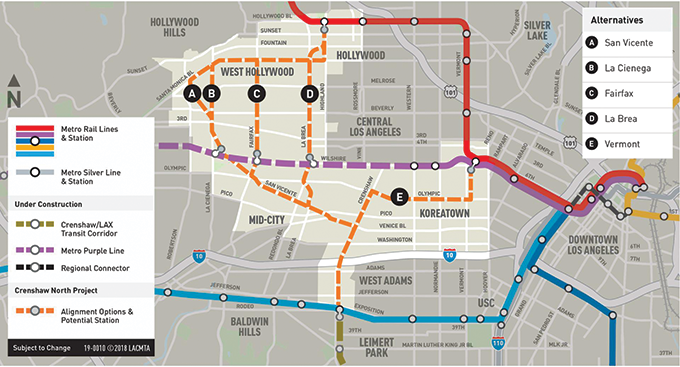 A March 28 community meeting hosted by Metro will discuss the five potential routes for an extension of the Crenshaw/LAX Line. (map courtesy of the West Hollywood West Residents Association)

This meeting, the final of four planned community meetings and the only one held in West Hollywood, will be from 6 p.m. to 8 p.m. at the West Hollywood Library at 625 N. San Vicente Blvd.

Depending on which route is chosen, up to nine new stations and nearly 10 miles of track could be built for the extension, which is planned to connect to the Red Line subway.

The project was originally planned to be done by 2047, but West Hollywood officials are pushing for the timeline to be accelerated in order for the extension to be complete in time for the 2028 Summer Olympics in Los Angeles.