Hancock Park resident Janna Bodek Harris first learned about Look What SHE Did! last year when the nonprofit group came to the Ebell of Los Angeles, where Harris serves as a board member. 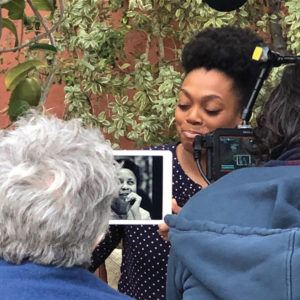 The nonprofit Look What SHE Did!, which includes several local residents, creates videos showing women talking about their heroines whose contributions have often been underappreciated or forgotten. (photo courtesy of Look What SHE Did!)

Harris said Look What SHE Did!, which creates short videos showing women talking about the often forgotten or downplayed role their heroines have played in history, told stories that hit home for her.

“I loved the idea of showing role models for younger women through these videos,” she said.

Harris reached out to the group’s co-founder and another nearby resident, Julie Hébert, for ways to get involved, and earlier this year, she landed on the group’s host committee for the Look What SHE Did! benefit brunch to be held March 31 at Jar restaurant at 8225 Beverly Blvd.

The event will feature MoveOn.org co-founder Joan Blades, UCLA professor Jane Margolis and Erin Aubry Kaplan, an opinion writer whose work appears in the New York Times, talking about the obstacles to women’s success, including those they’ve studied and faced themselves.

“You’ll be able to witness a live conversation between three outstanding women, discussing issues that are vital and important to us today. Plus, the food will be delicious and you’ll meet other terrific women,” said South Carthay resident Farrel Levy, a co-founder and board member for Look What SHE Did! who also serves as lead editor for the videos.

Levy said brunch will also offer the special experience of watching some of the videos as a group, where the audience can see how empowering it can be to share stories like these and discuss the impact the videos can make.

“These women are truly fascinating and as I learn about each one, I am just impressed and so proud of what we as women have done and can do,” Levy said.

In addition, the event will raise money to produce more videos. So far, 86 videos have been shot and 46 have been released, and there are no plans to stop.

“Women have been doing amazing things all through history, we just haven’t known about it,” Hébert said.

Harris said when girls and women find out about the impact women have had in the past, they realize they too can change the world. Put another way, “If you can see it, you can be it,” she said.

“Young women can go online and see videos about these women who have accomplished amazing things. [A lot of these stories are] not in the history books, and they should be,” she said.

Look What SHE Did! members said they also hope the benefit will let them do more with the videos they make. The existing videos were shot in Los Angeles – including some in Hébert’s backyard – but with the funds from the brunch event, Hébert said the group plans to travel to New York City and possibly Seattle as well to produce more.

“We may cross 100 videos this year with the help of this fundraiser,” Hébert said.

And for the women involved in the group, each new video is an opportunity to show a child how far they can go and the difference they can make if they put their minds to it. Priscilla Cohen, who serves on the advisory board for the group, said she loves the opportunity to change hearts and minds by telling stories.

“We all can play a huge part, either by leading the way and being a pioneer, or by uncovering and pointing to someone and shining a light,” she said.

Tickets are $250 and are available at classy.org/event/look-what-she-did-benefit-brunch/e224602. For information, visit lookwhatshedid.com.

Wilshire area residents are on the stump