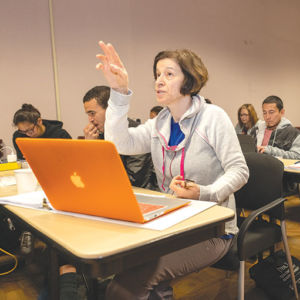 Laurel Elementary teacher Anna Melkumyan was among 30 instructors who recently attended the Los Angeles Department of Water and Power’s Environmental Institute, which provides information on environmental topics that participants can later use in lesson plans at their schools. Topics covered during the program’s three eight-hour sessions include conservation, renewable energy and the nexus of water and energy in the context of climate change. The institute is co-sponsored by LADWP, the Metropolitan Water District, California Department of Water Resources and the California Environmental Education Foundation. Teachers learn from experts at the utilities and are provided with hands-on lessons they can share with students.

The Environmental Institute launched in Los Angeles in 2015, and the most recent installment was the seventh in a series that was started in 2011 in Northern California by the California Environmental Education Foundation.