The Los Angeles County Museum of Art announced the acquisition of Zeng Fanzhi’s “Untitled (2018)” to its permanent collection. 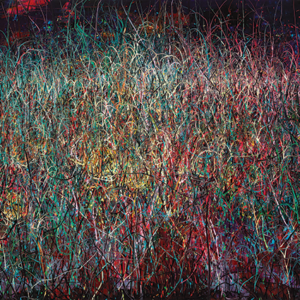 The museum purchased the painting, which is nearly nine feet tall and 12 feet wide, with funds donated by Dominic and Ellen Ng. In the past year, the museum has strengthened its holdings in Chinese art with major acquisitions, including the promised gift of Gérard and Dora Cognié’s collection of global contemporary ink paintings and calligraphy.

“In recent years, LACMA has been building relationships with partners in China while deepening our commitment to the study, interpretation and display of Chinese art, particularly contemporary art made by Chinese artists,” said Michael Govan, LACMA CEO and Wallis Annenberg director. “Dominic and Ellen are steadfast supporters of LACMA and our collaborations with Chinese arts institutions and artists.”

Stephen Little, the Florence and Harry Sloan curator of Chinese art and LACMA’s department head of Chinese and Korean art, said the Zeng painting is a “major addition” to the museum’s permanent collection, and more Chinese art is on the way.

“As we turn the corner into 2019, we look forward to the March unveiling of this magnificent painting, the June 2 opening of the exhibition ‘The Allure of Matter: Material Art from China,’ our engagement with the Yuz Museum in Shanghai and the promised gift of 400 works of contemporary ink painting from the Gérard and Dora Cognié Collection,” Little said.

“Chinese contemporary art has emerged as one of the most compelling areas of the global art landscape. The addition of a piece by Zeng Fanzhi, who is considered by many to be China’s greatest living artist, exemplifies Michael Govan’s vision to showcase a broad range of artistic voices and contributes to the ongoing cultural exchange between the East and the West,” Ng said.

Late filmmaker and painter to be honored

VINTAGE: Clovers on the cover