Councilman David Ryu, 4th District, said parks should be “a place to feel at home in your own neighborhood.” 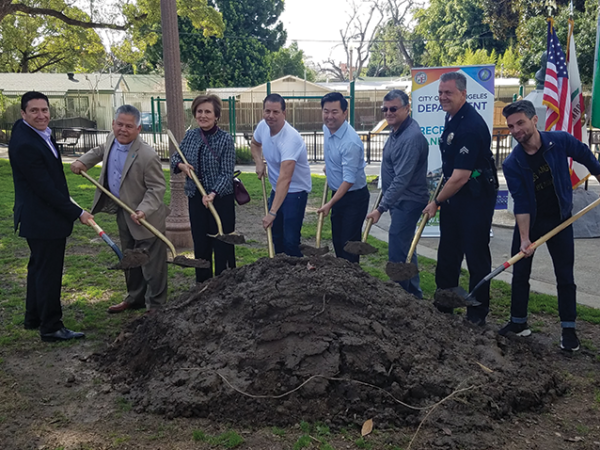 Councilman David Ryu, 4th District, residents and parks department officials broke ground on improvements to De Longpre Park in Hollywood. The project, which will cost approximately $400,000, will bring the playground into compliance with the Americans with Disabilities Act. (photo by Cameron Kiszla)

That was the case when he was growing up in an apartment in East Hollywood.

Now, Ryu and the Los Angeles Department of Recreation and Parks want to provide the same feeling to the 8,000 Angelenos who live within walking distance of 1.4-acre De Longpre Park at 1350 N. Cherokee Ave. in Hollywood. A March 4 groundbreaking celebrated the beginning of construction on improvements.

“There are a lot of apartments and residential spots that don’t have green space, so to be able to provide this space for the community is a big pleasure for us,” said Sylvia Patsaouras, president of the Los Angeles Board of Recreation and Park Commissioners.

The project will cost $400,000, Barajas said, and the city will use funds from Quimby fees ­– money paid by developers in lieu of building parks or donating land to accompany new projects ­– generated by projects built within five miles of the park.

The project will bring new equipment to the 4,200-square-foot play area, one structure for 2- to 5-year-olds and another for 5- to 12-year-olds.

The area beneath the equipment will change too, as sand will be replaced with a rubberized surface to bring the playground into compliance with the Americans with Disabilities Act.

“Even if the parent is disabled in a wheelchair, they [will be able to] participate with their kid and vice versa,” Barajas said.

The project also will provide the playground with a shade structure that includes a ShadowPlay roof, offering protection from the sun while using stained glass to create a colorful play area. Barajas believes De Longpre park will be the first to get a ShadowPlay roof.

Lights and cameras will be installed to provide more security at the park, which as recently as a few years ago experienced problems with homeless encampments.

Senior Lead Officer Paul Jordan of the Los Angeles Police Department’s Hollywood Division walks the park daily as part of his beat and said community engagement has reduced homelessness at the site. Neighbors report any homeless activity they see.

That’s a stark change from five years ago, when De Longpre Park could have been home to a dozen or more homeless people at a time, he said.

Now, neighbors bring their families and pets to what’s become “a really great place for the whole neighborhood,” Jordan said.

And with the new playground equipment, Jordan said things are likely to keep getting better.

“I think the improvements that they are making to the park is only going to increase the success of this,” he said.

I see few homeless in the park. They are the scapegoat of this community.what I see a lot of are dogs running loose in the park urinating and defecating. Nobody sees that and no laws are enforced. Make it an official dog park because that’s what it is. If you don’t like dogs don’t go there. It is not a park for everyone.
Del Powell

This is great! The old playground was outdated and the sand was coarse and dirty. Now I will be able to take my two kids to this park, which is walking distance, instead of driving to a cleaner park farther away