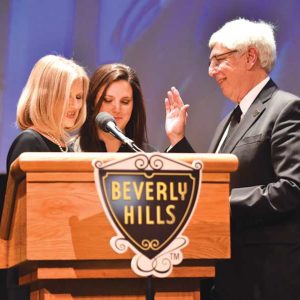 Julian Gold was sworn in as mayor of Beverly Hills by his wife, with his daughter looking on, at a March 20 installation ceremony. (photo courtesy of the city of Beverly Hills)

“We did a whole lot of things for health,” said Gold, co-chairman of Cedars-Sinai’s Dept. of Anesthesiology, reflecting on the past year. “As a physician, that always feels good.”

Those health-based initiatives will continue under Councilman John Mirisch, who was sworn in to his third term as Beverly Hills mayor on March 20, and Councilman Les Friedman, who became vice mayor for the first time. Both have supported increased restrictions on smoking.

Gold was first elected to the City Council in 2011, following terms on the city’s Traffic and Parking Commission and Recreation and Parks Commission. He previously served as mayor in 2015.

Addressing Beverly Hills residents at his swearing in last year at the Academy of Motion Picture Arts and Sciences, Gold also vowed to continue efforts to revitalize the shopping, dining, tourism and late-night culture in Beverly Hills. Stores have traditionally closed around 6 p.m., and Beverly Hills hoteliers have said they’re forced to send their guests outside the city for late-night entertainment.

“How can we improve what we have, being mindful of our heritage, but being aware of our competition?” Gold said when he was sworn in. “We must find a way to compete where perhaps we have not had to compete before.”

In 2018, the city continued the BOLD programming that Councilwoman Lili Bosse initiated during her last term as mayor in 2017. Plans are currently in the works for this summer’s BOLD events. The city saw an uptick in pedestrians on Rodeo Drive from 4-8 p.m. on Saturdays during August and December, when BOLD events were scheduled, one of several encouraging metrics city staff reported to the council.

Since passing an urgency ordinance in 2017 aimed at giving renters more protections, the City Council continues to chip away at passing a Rent Stabilization Ordinance. It took a step forward earlier this month when it passed an ordinance to create a Rent Stabilization Commission, with prospective appointees to be interviewed by council members.

As mayor, Gold also oversaw the completion of the Santa Monica Boulevard reconstruction project and the debut of the Beverly Hills Fire Department’s Nurse Practitioner 1, which responds to calls for service and is staffed with both a nurse practitioner and firefighter paramedic.

“All of these things contributed to the residential quality of life in a big way,” Gold said of the council’s efforts in the last year.

“We came away much better off than when we started it,” he said.

VINTAGE: Clovers on the cover