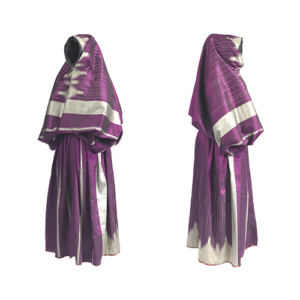 The “Dressed with Distinction” exhibit includes a colorful women’s garment known as a çarşaf. (photo courtesy of the Fowler Museum at UCLA)

The exhibit includes a collection of rare garments assembled by David and Elizabeth Reisbord with examples of Arab and Ottoman attire dating from the late-19th to early-20th centuries. It celebrates clothing created in urban centers such as Aleppo, Damascus and Homs, where dyeing, weaving and decorative techniques earned the region international renown for textile production. Residents were famous for wearing brightly-colored silk clothing glittering with gold and silver thread.

After World War I (and the end of 400 years of Ottoman rule), Syrians began showing preference for Western attire, leading to an eventual decline in handwoven garment production. More recently, conflict in the Eastern Mediterranean region has virtually eradicated most remnants of the textile traditions and skills. Thus, the exhibition documents the heritage of iconic Arab and Ottoman garments and the importance of fashion as a marker of cultural knowledge.

“The Fowler Museum is honored to become the repository and custodian of this rare collection of Ottoman Syrian attire, both donated and promised to the museum by the Reisbords,” said Marla C. Berns, the Shirley and Ralph Shapiro Director at the Fowler Museum. “This record of Middle Eastern textile heritage offers extraordinary opportunities for study and appreciation.”

Installed according to type, garments worn by urban women, men and children are on display including full-length cloaks (abaya), jackets (qumbas), smaller head coverings (hatta) and a two-piece woman’s body and head covering (çarşaf). Silk and woolen garments have retained their rich red, blue and purple hues, while diaphanous patterns adorn summer housecoats woven in lighter colors. Colorful and complex ikat techniques (involving resist-dyed threads prior to weaving) incorporated an extensive range of natural dyes. The garments were created using a diverse range of weaving techniques including tapestry weaves, brocade and painstaking hand-stitched embroidery. Garments with certain cuts and decoration could define the wearer as Arab or Ottoman, and indicate religious preferences and class status.

District voices support for bill to improve after school programs