The sticky pools at the La Brea Tar Pits and Museum nearly claimed another victim recently when the statue of a baby mammoth near one of the pits started leaning precariously. 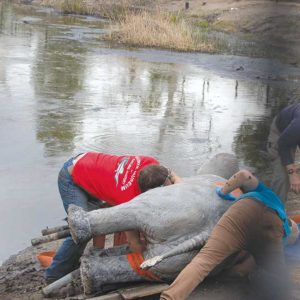 Crews worked on a statue of a baby mammoth at the La Brea Tar Pits and Museum on Monday as part of a project to repair its base. (photo by Edwin Folven)

The baby mammoth is located next to a larger mammoth statue on the bank of a large tar pit along Wilshire Boulevard. The statues appear to be in distress about another large mammoth partially submerged in the tar pit in an exhibit simulating how animals became stuck and died in the area thousands of years ago. The baby mammoth statue, which is made of fiberglass with concrete foot pads, started sinking and leaning. It was the result of ground erosion and a new tar seep that opened near the foot of the statue along the bank of the tar pit, said Kristin Friedrich, director of communications for the Natural History Museum of Los Angeles County, which oversees the La Brea Tar Pits and Museum.

“The ground in that spot has just gotten a bit uneven since the last time the statues were cleaned and repositioned in 2014, so we need to move it slightly to a more level and stable spot and re-anchor it with some better support and weight distribution,” Friedrich said. “This has probably been a gradual process, but got noticeably worse in fall 2018.”

“There are no big issues with the other statues, which because of their size and different positions were originally anchored/installed differently from the baby mammoth,” she added.

The baby mammoth statue was scheduled to be back in place today.