The director of a West Hollywood private school and two Beverly Hills residents are among the more than 40 defendants facing charges from the federal government over a scam to bypass admissions processes at some of the top colleges and universities. 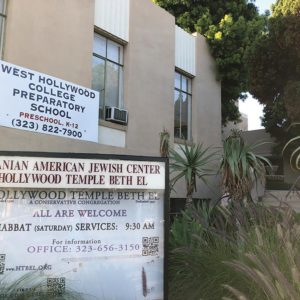 West Hollywood Preparatory School is housed in the Hollywood Temple Beth El building at 1317 N. Crescent Heights Blvd., but the two are not affiliated. (photo by Luke Harold)

Between 2011-18, parents allegedly paid $25 million to college admissions consultant William Singer to circumvent college admissions processes by having ACT and SAT test results altered or having their children recruited as athletes, with for-profit business The Key and nonprofit Key Worldwide Foundation facilitating the financial transactions. Singer became a cooperating witness, listed as CW-1 in the complaint, and agreed to plead guilty to charges including racketeering conspiracy, money laundering and conspiracy to defraud the United States.

Beverly Hills resident Jane Buckingham, a marketing executive, allegedly paid $50,000 to have a person who was involved in the scheme take the ACT for her son at a testing center in Houston and arranging a score of around 34 out of 36. The hired test-taker ended up scoring a 35 on behalf of her son. Buckingham then allegedly sought the same arrangement for her daughter.

“But if she got a 32 or 33, I’m assuming that would make her pretty competitive,” Buckingham said, according to a wiretapped conversation she had with one of the alleged perpetrators of the scheme.

Attorneys representing Buckingham did not respond to a request for comment.

In 2016, Beverly Hills resident Robert Flaxman, who has a real estate business with offices in Beverly Hills, allegedly paid $250,000 for his son to be admitted to the University of San Diego as a student athlete. He allegedly paid another $75,000 to fraudulently improve his daughter’s ACT and SAT scores.

“We’ll say that the payments were made to our foundation to help kids – underserved kids,” Singer told Flaxman, referring to the Key Worldwide Foundation, based on a transcript of a wiretapped phone call.

A public relations representative for the attorneys representing Flaxman said they have no comment.

Students who went to the West Hollywood school to take their tests, and then have them altered, include the daughter of Gregory and Marcia Abbott, residents of New York and Aspen. Their payment for the scam was made in the form of a $50,000 donation to the Key Worldwide Foundation. Joey Chen, a Newport Beach resident charged in the federal complaint, paid $75,000 to a college counseling company, The Key, around the same time.

The daughter of the Abbotts, who were both charged, and Chen’s son then went to West Hollywood College Preparatory School on the same day to take the ACT, court records show. The proctor who administered the test altered their answer sheets to improve their scores.

The highest profile defendants charged so far include actress Felicity Huffman, and “Full House” actress Lori Loughlin and her husband Mossimo Giannulli. Huffman allegedly paid $15,000, masked as a charitable contribution but allegedly went to the suspects who carried out the scheme, to cheat on the SAT to benefit her oldest daughter. Loughlin and Giannulli allegedly paid $500,000 to have their two daughters admitted to USC as recruits for the crew team, even though they never participated in crew.