A change in command is coming to the Los Angeles Police Department’s Wilshire Division on May 12 when Capt. Anthony Oddo, the police station’s current commanding officer, will be reassigned as head of the department’s Gang and Narcotics Division. 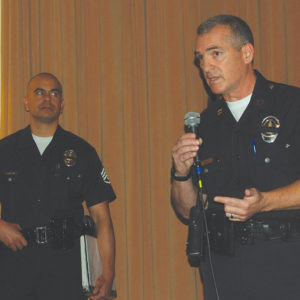 Capt. Anthony Oddo, commanding officer of the Wilshire Division, discussed crime prevention at a meeting hosted by the Greater Wilshire Neighborhood Council. He will be leaving the Wilshire Division in May after being reassigned to the LAPD’s Gang and Narcotics Division. (photo by Edwin Folven)

Oddo, who has served as captain of the Wilshire Division since December 2016, will be replaced by Capt. Timothy Nordquist, who is currently with the LAPD’s Internal Affairs Division. Oddo said he enjoyed working in the Wilshire area and is looking forward to his new assignment. While there have been many challenges, Oddo said accomplishments have been made in combating crime and improving quality of life.

He added, however, that there are still challenges ahead. Crime in and around the Melrose District is a top priority, particularly with a recent increase in street robberies including a high-profile robbery earlier this month on Waring Avenue captured on video and widely reported by the media. The victim in that robbery was wearing a Rolex watch and people are cautioned not to flaunt expensive clothing or jewelry that may be attractive to thieves. Other tips include not being distracted by smart phones while walking alone and being more aware of surroundings.

“Overall, [crime] is down, but that’s not considering these new robberies along the Melrose corridor. We have had a significant increase since the beginning of the year,” Oddo said. “We have been deploying resources to address that situation. Right now, that is our biggest concern.”

From Jan. 1 through the second week of March, 13 robberies were reported in the Melrose District, which experienced four during the same period the previous year. Additional patrols have been deployed and Senior Lead Officer Ian O’Brien is working with residents and business owners to keep them apprised and educate them about crime prevention. The latter approach is an important component of “hardening the target,” Oddo added.

Oddo said another persistent challenge in the Melrose District and elsewhere in the division is auto burglaries, which account for a large amount of the property crimes. Statistics show that through the second week of March 2019, motor vehicle burglaries are up division-wide by 8.9 percent, from 259 year to date in 2018 to 282 in 2019. Oddo said many auto burglaries can be attributed to people leaving valuables visible inside vehicles. The division uses the “Lock It, Hide It, Keep It” program to educate motorists about keeping property secure. That program includes posters, community outreach and communication about crime prevention via social media.

“People breaking into cars is always going to be an issue,” Oddo said. “In Wilshire, the lock it part is being heard but the hide it part is still frustrating. People lock doors but are keeping laptops out and are leaving valuables in plain sight. Putting valuables in the trunk will go a long way toward resolving those issues.”

Oddo added that prevention is a significant component of reducing crime, and he credited residents with playing a role in keeping overall incidents decreasing division-wide. Violent crimes are down 4.5 percent year to date in 2019 compared to the same period in 2018. Property crimes are also down 6 percent so far this year over last. Even with an uptick in street robberies in the Melrose area and increase in auto burglaries, the division has experienced an overall 5.8 percent reduction in all major crimes occurring since the beginning of 2019, compared to the same period in 2018.

“Our neighborhood watch programs are increasing. That is something that was a nice situation that I dealt with,” Oddo added. “The community is stepping up. We all realize the police department can’t solve all the problems. It takes a partnership. There has to be more of that to keep us moving forward.”

Oddo also recommended the use of home security systems with cameras so police can use video to link suspects to crimes. Simple things like keeping doors and windows locked is also important.

“Two years ago, about half of the burglaries were occurring because doors or windows were left unlocked, and that has gone down dramatically,” Oddo said. “People are hardening the target.”

Oddo, who has been with the LAPD for 30 years, said he will next oversee a division that focuses on crimes involving gangs and drugs. In the new position, he will work with local and federal law enforcement agencies to address the problems on a regional level. Still, he will always have fond memories of his time at the local Wilshire area police station.

“Wilshire will always be a special place because of the people I’ve met and the officers I’ve worked with here,” he added. “My time at Wilshire has been outstanding. I have really enjoyed myself.”