The Los Angeles Zoo introduced the first California condor to participate in a free-flight, naturalistic bird show, allowing guests to see a critically-endangered species the L.A. Zoo helped bring back from the brink of extinction. 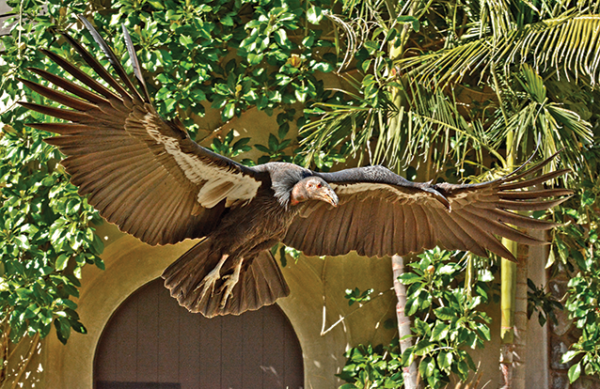 Hope, a 4-year-old California condor at the Los Angeles Zoo, will be the first of her species to participate in a free-flight bird show. The Angela Collier World of Birds Theater will host the performances six days a week. (photo by Tad Motoyama/courtesy of the Los Angeles Zoo)

Aptly named Hope, the 4-year-old, female New World vulture will serve as an ambassador for her species by allowing staff the opportunity to share her journey and educate guests on how they can help save California condors in the wild.

“Being able to share the story of Hope and her fellow California condors through our free-flight bird show will leave a lasting impression on our guests by highlighting the beauty, intelligence and heart of one of America’s most critically-endangered species,” said Mike Maxcy, curator of birds at the Los Angeles Zoo. “Wildlife conservation can be demonstrated through various efforts, but perhaps the most effective way is to impart knowledge through visual stimuli.”

The L.A. Zoo has housed California condors since 1967, when the now legendary Topatopa came to the zoo as a malnourished fledgling rescued from the wild. In 1987, there were only 27 California condors left on the planet, so the U.S. Fish and Wildlife Service and the California Fish and Game Commission agreed to create a captive breeding program for the species.

Over the years, the zoo’s role in this collaborative program has evolved from a focus on building a captive breeding population to one of monitoring and maintaining the populations of wild birds that have been re-established in California. There are now roughly 500 California condors in the world, of which about half are living in the wild.

“The significance of Hope’s role in this free-flight bird show is not only as a symbol of the L.A. Zoo’s commitment to conservation efforts for California condors but also as a source of pride for the community,” said Denise Verret, interim zoo director. “Hope’s story is yet another way we can share with the public the hard work we are doing on behalf of our fellow Angelenos to preserve a species found in our own backyard that is needlessly dwindling.”

Guests can observe Hope, along with her fellow bird show companions, at the Angela Collier World of Birds Theater at noon and 2:30 p.m. every day of the week except for Tuesdays, weather permitting.