More than 100 people gathered on March 19 at an open house at a new temporary homeless shelter scheduled to open next Tuesday in Hollywood. 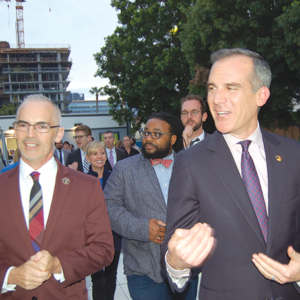 Mayor Eric Garcetti (right) and Councilman Mitch O’Farrell toured the new bridge housing facility in Hollywood on March 19 and said it will make an impact on homelessness in the area. (photo by Edwin Folven)

The facility at 1533 Schrader Blvd. will house 72 men and women, and will provide on-site services to help residents transition into permanent housing. It will be run by People Assisting the Homeless and The Center at Blessed Sacrament.

The shelter is part of the mayor’s “A Bridge Home” program, which provides extra funding for resources to City Council districts where temporary homeless shelters are created. The goal is for the shelter to be in place for three years while permanent housing is built. Mayor Eric Garcetti and Councilman Mitch O’Farrell, 13th District, toured the new facility and said it will help alleviate the homeless crisis.

“We are investing billions of dollars in permanent housing and services to end this crisis for good, but our homeless neighbors can’t wait,” Garcetti said. “They need a place to sleep tonight, and that’s what ‘A Bridge Home’ brings to our communities. I’m grateful to Councilmember O’Farrell for his hard work and leadership, as well as the many partners that have made [this] possible. This site in the heart of Hollywood is another important step forward, and we won’t stop working until we bring every homeless Angeleno indoors.”

O’Farrell said the shelter is a model to be replicated throughout the city. The structure was built with outer membranes over rigid frames so the building can withstand the elements but can be easily removed. It was built on the site of a city-owned parking lot.

“Homelessness is the number one crisis facing our city, and nothing less than an ‘all hands on deck’ approach will bring relief to our challenges,” O’Farrell said. “From day one, Hollywood has recognized the critical importance of working together to bring this resource to the area. This facility was built with a collaborative approach that is reflective and emblematic of the Hollywood community.”

O’Farrell spearheaded the project, meeting with community groups and building support on the City Council. It is the second “A Bridge Home” facility to open, following the first at El Pueblo in downtown Los Angeles. 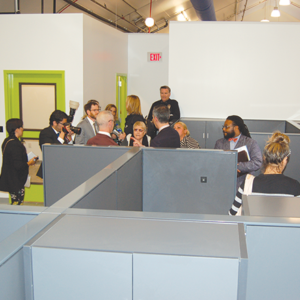 Mayor Eric Garcetti and Councilman Mitch O’Farrell spoke to the media during a tour of the new shelter’s dormitory. (photo by Edwin Folven)

“We will be providing programming and support services for people coming off the streets and being connected to permanent supportive programs where they will, as soon as possible, be moved into permanent homes,” Fletcher said. “The outreach teams have been working in collaboration with LAHSA’s (Los Angeles Homeless Services Authority) coordinated entry system for the past few months to generate a list of people who are experiencing homelessness in the Hollywood community and all those folks are the ones who will be coming into the shelter next Tuesday.”

The new facility has separate dorms for men and women with individual cubicles for each resident. It also has restrooms, showers and a laundry facility, as well as office space for case workers. Full-time security will be stationed at the site and the city will oversee maintenance. A small outdoor area for pets is also included.

“This innovative bridge housing program is a way to provide immediate assistance where it’s needed the most,” said Miriam Gonzalez, of the social service agency The People Concern. “Having a shelter in the community where homeless individuals reside is paramount, and that will get people moving into more permanent housing.”

Additional city resources will be dedicated to the area around the facility including enhanced outreach, sanitation and public safety personnel. Capt. Cory Palka, commanding officer of the Hollywood Division, said the new shelter will be a benefit for Hollywood.

“I think this is a major step for the city and the Hollywood community to address this crisis called homelessness,” Palka added. “We are in desperate need of this alternative and we owe it to the community and the taxpayers who paid for this to give it everything we’ve got to see this turn into a huge success. It’s a solution to bridging the gap between homelessness and permanent housing.”

Others added that the facility has a welcoming layout, including a communal courtyard, that offers homeless individuals a dignified place to stay until they are placed in permanent housing.

“When I was homeless, I was in an old shelter model with a dorm-style room that was like jail,” said Shanae Cannon, who is now an outreach worker in Hollywood for LAHSA. “The new shelters give back more dignity and respect to people. Residents will have their own cubicle and more space and the service providers are more aware. We’re bringing more lived-experience staff like me to better connect with the people we’re serving.”