Police are trying to find the person responsible for scrawling two swastikas in blood in Pan Pacific Park on March 4, which has investigators puzzled. 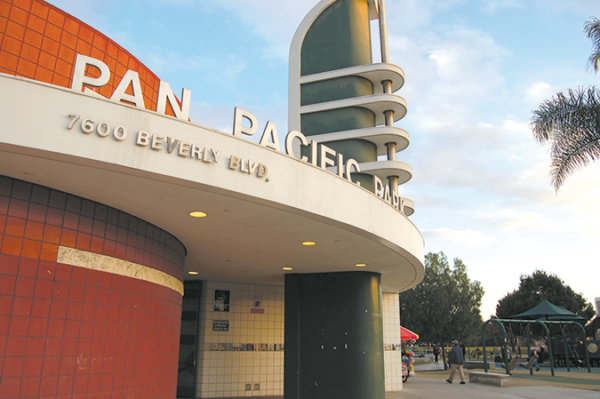 A large amount of blood and anti-Semitic graffiti was found near the recreation center at Pan Pacific Park on March 4. (photo by Edwin Folven)

Park employees called authorities at 6:45 a.m. on Monday to report a large amount of blood in and around a restroom near the park’s recreation center. The swastikas, approximately 12 inches by 12 inches in size, were scrawled on a concrete bench near an adjacent playground.

Wilshire Division officers arrived and based on the amount of blood found believed a crime had taken place and someone had been seriously injured, said LAPD spokeswoman Lizeth Lomeli. They searched the area and called personnel from the LAPD’s K-9 Unit, which used bloodhounds in an attempt to track the injured person.

The dogs followed a blood and scent trail to the southern end of the park and east on Third Street until the trail went cold. Nobody believed to be involved was found and detectives are seeking tips from the public. Police surmise a transient may have injured themselves, scrawled the anti-Semitic graffiti and left the area. The blood and symbols were cleaned up shortly after being documented by police.

The swastikas were located a few hundred feet from the Los Angeles Museum of the Holocaust. Police are investigating it as a possible hate incident.

“Acts of hate and anti-Semitism are deeply painful and have no place in the city of Los Angeles,” said Councilman David Ryu, 4th District. “With hate incidents on the rise locally and nationally, we must stand up for our diverse communities and their safety. I am in contact with LAPD while this remains under investigation, and urge anyone with information to contact the LAPD Wilshire Division.”

Los Angeles Museum of the Holocaust President Paul S. Nussbaum denounced the swastikas in Pan Pacific Park, as well as a photograph that recently surfaced of teens at a party in Orange County posing near cups from a drinking game arranged in the shape of a swastika.

“We all, collectively, bear responsibility for the hijacking of these symbols of human misery and destruction for casual entertainment,” Nussbaum said. “Parents, teachers, educators and our elected leaders need to emphatically condemn these incidents and pledge to enlighten and educate our youth.”

Fairfax District resident Robert Cherno also expressed concern about the circumstances surrounding the blood and the anti-Semitic symbols found in the park. He said more needs to be done to reduce transient-related crime in the area.

“We are having a major problem with transients in that park,” Cherno said. “I am pretty outraged that something like this happens in a predominately Jewish neighborhood.”

Anyone with information is urged to call Wilshire Division detectives at (213)922-8205. During weekends and off-hours, call the LAPD’s hotline at (877)LAPD247.