When D.G. Cathcart, Los Angeles County’s former chief personal property appraiser, was journaling about his life, his job and anything that caught his fancy, he could never have guessed how many people would show interest. 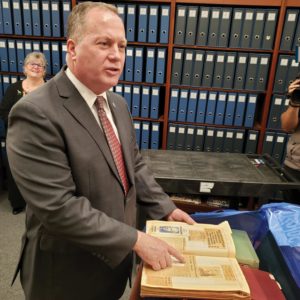 But 20 of Cathcart’s journals dating from 1934 to 1951 were discovered in the basement of the Los Angeles County Hall of Administration by Los Angeles County Assessor Jeffrey Prang, a self-described “history buff” who realized how important such documents could become.

“He was just keeping track of what’s going on that day, and now it has become history,” Prang said.

On March 18, Prang donated the journals to the Seaver Center for Western History Research at the Natural History Museum of Los Angeles County.

“I’m glad we could give it to the museum, where it can be appreciated and maybe provide some valuable insight and research opportunities for people in the future,” Prang said.

The journals contain a wide variety of information and documents.

For instance, Cathcart recorded information relating to work, like notes about “escaped assessments” – missed tax payments overlooked by the assessor – and a promotion he didn’t get. Just a few pages away, he placed newspaper clippings, like articles discussing the then-burgeoning World War II, advertisements for pianos and anything else he found interesting.

When Prang brought the journals, Betty Uyeda, a collections manager for the Seaver Center, thanked him for the donation and showed him some of the other assessor-related documents the museum already has, including fire insurance maps and the property records of famous Angelenos like Pío Pico, the last Mexican governor of Alta California and namesake of Pico Boulevard, and his brother Andrés Pico, a general, state assemblyman and state senator.

Uyeda said the photographs, clippings and other papers in the journals will be preserved, scanned and cataloged for future research.

“Thank you for not throwing these materials away. It’s due to visionaries such as yourself that the museum is able to save and preserve a lot of these documents, especially these government documents,” she said.

“This is the kind of stuff that this place is about,” he said.

Prang said he was happy to be able to help, and finding the journals allowed him to pursue another of his passions: genealogy. He said he’s traced his family history back more than 1,000 years, and Prang put some of his skills to work researching Cathcart and other former assessor’s office employees on Ancestry.com

Prang also wasn’t afraid to put his assessor skills to the test, and he took a stab at estimating the value of the journals.

Roads to be closed for Los Angeles Marathon