Angelenos to Walk to End Genocide

The nation’s largest anti-genocide demonstration will take place on March 31 with more than 1,000 Angelenos of all ages and faiths expected to rally at Jewish World Watch’s 13th annual Walk to End Genocide. The family-friendly walk and advocacy festival, held at Pan Pacific Park from 10 a.m. to 1 p.m., calls attention to genocide and mass atrocities taking place worldwide and raises money to help survivors, including the 68.5 million displaced by global violence. 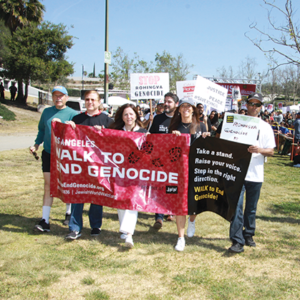 The 13th annual Walk Against Genocide will be held March 31 at Pan Pacific Park. (photo courtesy of Jewish World Watch)

Participants, including elected officials, clergy, students and educators, will learn about ongoing global conflicts and solutions through innovative, hands-on, educational exhibits focused on projects that support survivors from the Democratic Republic of the Congo, Myanmar (Burma), Sudan, South Sudan, Syria and Yemen.

“In every generation, it is our obligation to answer the inhumanity of genocide and the vile forces of prejudice and anti-Semitism with action and compassion,” said Mayor Eric Garcetti. “Through the annual Walk to End Genocide, thousands of Angelenos refuse to stand idly by. Instead, we pray with our feet, reminding the world that we will never again turn our backs when the world’s most vulnerable people are persecuted for who they are, who they love or what they believe.”

Highlights of the advocacy festival, which will be open before and after the 5K walk, include many activities new to the event, such as a free hate speech workshop with tools to combat the language and social media which can empower evil and the Red Hands Brigade, which is art-based advocacy aimed at stopping the global use of children as soldiers and laborers in dangerous mines that support warfare.

There will also be a Jump-A-Thon for Justice for kids of all ages and opportunities to talk with survivors of the Holocaust and other genocides, learn about the struggle to deliver medical aid behind enemy lines in Syria using “guerrilla humanitarian aid,” and send emails urging elected officials to protect the Myanmar’s Rohingya minority, which is currently being subjected to ethnic cleansing.

Performances by local musicians, children’s choirs, art exhibits and JWW’s “I CARE” video campaign will take place throughout the day, and there will be additional activities for teens and younger children. Food, merchandise and jewelry will be available for purchase with proceeds supporting anti-genocide efforts.

The event is an essential fundraiser for JWW as it continues to educate, advocate and support anti-genocide programs. A second walk will take place in Thousand Oaks on April 7.