In a ceremony filled with condemnations of Sacramento politicians over housing policy, a Broadway-style musical number and a sing-along of “I’d Like to Teach the World to Sing,” Beverly Hills City Councilman John Mirisch was sworn in as mayor on March 20. 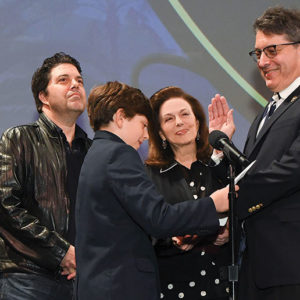 Mirisch was sworn in by his son. (photo courtesy of the city of Beverly Hills)

Mirisch is in his third one-year term as mayor, a ceremonial position that rotates among the five council members, since he was first elected in 2009. Councilman Les Friedman, first elected two years ago, enters his first term as vice mayor.

Last year, when Mirisch was sworn in as vice mayor, he denounced a proposed state legislation designed to increase housing density that had been introduced by state Sen. Scott Wiener (D-San Francisco).

That bill, SB 827, died in committee, but it’s back this year with some modifications as SB 50. It would supersede local laws to allow higher density zoning near public transportation. Mirisch called it, and other housing bills pending in the Legislature, a “war on single-family housing” led by Sacramento politicians who say single-family housing is “inherently racist and immoral.”

In a followup phone call, Mirisch said he was referring to Wiener and state Sen. Nancy Skinner (D-Berkeley), a coauthor of SB 50, referencing Richard Rothstein, an academic whose areas of expertise include education, race and ethnicity. In Rothstein’s book “The Color of Law,” he argues that some local zoning policies have disproportionately excluded minority and low-income segments of the population.

The Beverly Hills City Council has opposed the bill because the whole city is within close proximity to transit corridors, as defined by the proposed legislation, and would be subject to the new zoning.

“Effectively they are attempting to use the housing affordability crisis to eliminate single-family zoning,” Mirisch said. “It’s a war on communities and an effort to impose one-size-fits-all measures which would financially benefit developers who don’t like to play by the rules.”

Wiener has repeatedly said the goal of the bill is to provide housing for the growing number of California residents. 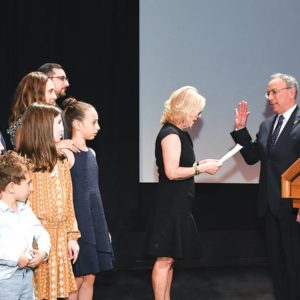 Friedman was sworn in by his wife. (photo courtesy of the city of Beverly Hills)

(During his speech, Mirisch referred to a tradition of using noisemakers to blot out the name and memory of Haman, a biblical figure who plotted to kill Jews. Noisemakers were handed out at the installation, and Mirisch instructed audience members to use them whenever he said “Sacramento politicians.” Wiener, who is Jewish [as is Mirisch and the rest of the City Council], called the comparison “incredibly offensive” and said Mirisch “should be ashamed of himself for going so deeply into the gutter.” Read Mirisch’s response.)

Mirisch said the population density of Beverly Hills is already greater than cities including Denver, but Beverly Hills also ranks 155 out of 272 neighborhoods throughout the county in population density, according to the L.A. Times’ Mapping L.A. project. Neighboring West Hollywood, by comparison, is No. 18, in addition to Mid-Wilshire at 42, Westwood at 54 and Beverly Grove at 55.

Approximately 63 percent of Beverly Hills housing is multifamily housing, according to the city’s general plan, and more than 60 percent of its housing is more than 50 years old. The general plan mentions a drop-off in residents ages 25-44 due in part to the high costs of housing. The population in L.A. County grew 3 percent from 2000 to 2010, according to Census data, compared to 1 percent in Beverly Hills.

But Mirisch denounced the “density fetishism” of Sacramento politicians, and said through the Rent Stabilization Ordinance the City Council has been working on, and through other local means, cities should craft their own identities.

“It needs to be up to local communities to decide what is right for them,” he said.

The installation ceremony began with a moment of silence for the 50 victims who died in a shooting at a New Zealand mosque earlier this month.

“If we are to allow ourselves to expand our horizons and expand our potentials, we need to practice not only kindness, but tolerance,” Mirisch said, also referring to recent spates of anti-Semitism.

Friedman’s speech focused on the “sense of community [that] can be found on every corner,”

“We are in the middle of a metropolitan Los Angeles area but with a beauty and peacefulness that is really hard to replicate,” he said.

Man who threatened to blow up store sentenced for robbery

[…] Needs Assessment of three units over an eight year period. Wiener raises a valid question. Although 63% of its housing is already multi-family, it’s possible that Beverly Hills may have gamed the RHNA system. If so, the way to fix that is […]

[…] Needs Assessment of three units over an eight year period. Wiener raises a valid question. Although 63% of its housing is already multi-family, it’s possible that Beverly Hills may have gamed the RHNA system. If so, the way to fix that is […]