Arts Club to move forward after WeHo says Yes on B

West Hollywood voters upheld the City Council’s approval of the Arts Club project on the Sunset Strip, according to the unofficial vote totals reported by the county clerk the morning after the March 5 election. 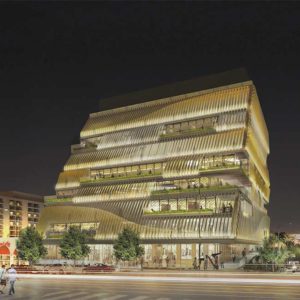 (rendering courtesy of the city of West Hollywood)

West Hollywood Mayor John D’Amico said he was “super pleased” about the Measure B outcome.

“That’s an exceptionally good project for the Sunset Strip and will set in motion a lot of new and exciting adventures up there,” he said.

The project, which would replace the Hustler store at 8920 Sunset Blvd., received City Council approval last summer, and more than 30 residents voiced their support. But Unite Here Local 11, a union that represents hospitality workers in the region, successfully petitioned local residents to place the Measure B referendum on the ballot. The more than 60 percent of residents who voted yes will uphold the council’s approval of the project; a no vote would have prohibit the necessary zoning change, and the City Council would have to wait one year to consider it again, according to City Attorney Mike Jenkins.

Councilwoman Lauren Meister said she was happy to see residents validate the council’s decision by voting yes on Measure B.

Unite Here petitioners collected more than 2,800 signatures to put Measure B on the ballot.

The Arts Club was established in 1863 for the arts community in London and continues to serve various creative industries. The West Hollywood version, by VE Equities and London & Regional Properties, would be 120,000 square feet and 141 feet tall. It would include creative offices, retail, a restaurant with outdoor dining, and a public art gallery and rehearsal space, along with a 351-space subterranean garage.

“We were very, very pleased,” Afriat said of the post election returns. “It’s going to be an iconic project on the Sunset Strip.”

“The Arts Club is an example of the sort of innovative and groundbreaking development that will enliven the Sunset Strip,” Councilman John Duran said.