Center Theatre Group has selected 12 high school students to participate in the regional finals for the 2019 August Wilson Monologue Competition, which will be held on Monday, March 11, at the Mark Taper Forum. 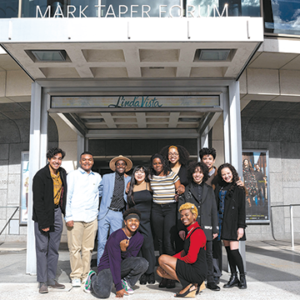 Twelve finalists will present monologues during the competition on March 11 at the Mark Taper Forum. (photo by Ericka Kreutz Photography)

It is the eighth consecutive year Center Theatre Group is hosting the Southern California component of the national monologue competition. The program inspires and educates Los Angeles youth using monologues from August Wilson’s “American Century Cycle,” a 10-play cycle that details the complexity of the African-American experience in the 20th century.

On March 11, the 12 regional finalists will perform their monologues at the Mark Taper Forum in front of an invited audience, including a panel of judges. The two top-performing students will earn an all-expenses-paid trip to New York City for the chance to perform in the AWMC national finals. The third-place winner will serve as alternate. The national finals will take place on May 6 at the August Wilson Theatre on Broadway.