As electric scooters remain popular throughout the county, the West Hollywood City Council tightened the restrictions that it put in place several months ago to keep the devices out of the city. 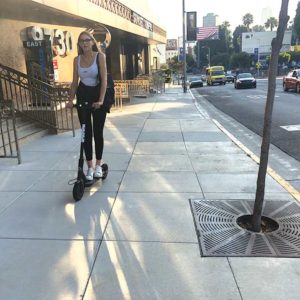 The city has been impounding scooters left in public rights of way, but a new law approved during the council’s Feb. 4 meeting will result in their disposal if they’re not claimed by their companies within 30 days.

“These companies are literally littering our streets with scooters,” Councilwoman Lindsey Horvath said, adding there should be additional enforcement. “They’re considering them trash, so I hope that there’s some sort of accountability with these companies, especially since they’re seeking to do business with the city with regard to bike share in the future.”

There have been 19 citations issued to scooter companies since the City Council voted to ban the devices from being left in public, according to city staff. Of the 37 scooters that have been impounded, two were reclaimed. Another resolution coming before the City Council would charge the scooter companies a storage fee of $10 per day, for up to $300. The city’s Code Compliance Division has also received more than 200 scooter-related complaints since last June.

Representatives from Lime and Bird were unable to comment by press time. Cities across the country have been contending with the safety concerns electric scooters have presented since they hit the streets toward the end of 2017. The Los Angeles City Council voted in September to start a pilot program that limits the number of scooters per company to 3,000, and calls on the city to begin improving its infrastructure to keep riders off the sidewalks. The Beverly Hills council banned scooters with a local law that penalizes companies if their devices are left in public rights of way, and allows police to issue citations to riders.

When the West Hollywood City Council instituted the scooter ban last summer, council members cited the lack of infrastructure in place, resulting in riders using them on sidewalks at speeds up to 15 mph.

“It’s very important that council engage with staff in implementing those proposals, because although since 2003 there have been proposals for 14 bicycle lanes for different streets throughout the city, only one and a half have actually been installed in those 15 years,” said Kevin Burton, a West Hollywood resident and member of the West Hollywood Bicycle Coalition, the local chapter of the Los Angeles County Bicycle Coalition. The city’s 2017 Pedestrian and Bicycle Mobility Plan found that 43 percent of cyclists ride on the sidewalks due to the lack of infrastructure for bicycles. West Hollywood is also looking to partner with Beverly Hills and Los Angeles to form a larger bike share network.

A report from the city’s Community and Legislative Affairs Division said there will be a focus on bicycle infrastructure, as well as lighting and landscaping, along alleyways parallel to Santa Monica Boulevard.

Beverly Hills tobacco sales could go up in smoke