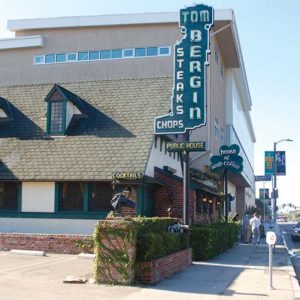 Before it closed last year, the bar built a long and storied history.

The conservancy and Miracle Mile Residential Association are spearheading an effort to preserve that history by having the 70-year-old building named a historic-cultural monument.

The designation would declare the building a landmark and prevent alterations to the interior or exterior of the structure without approval from the Los Angeles Cultural Heritage Commission.

The building would be given a plaque denoting its historical value and the property owner would see a reduction in property taxes. Derek Schreck, the bar’s owner, did not respond to calls for comment.

The request for landmark status will go before the Cultural Heritage Commission on March 7.

If approved by the commission, the building’s landmark status will then be considered by the Los Angeles City Council’s Planning and Land Use Management Committee before final approval by a full council vote.

Once known as Tom Bergin’s Old Horseshoe Tavern and Thoroughbred Club, the pub opened in 1936 on Wilshire Boulevard and moved to the Fairfax location in 1949, where it was a popular watering hole for many Angelenos, including Hollywood stars like Cary Grant and Ronald Reagan.

“You can’t help but soak it in when you’re there,” Fine said.

Hixon said the Tom Bergin’s, which was famous for its Irish coffee, was known as a “touchstone” that appealed to a wide swath of Angelenos.

“You could take your grandparents to dinner there and turn around the next week and get drunk with your buddies watching a football game. It had a ubiquity to it,” he said.

That’s why the pub’s closure after last year’s St. Patrick’s Day celebration came as such a shock to many Angelenos, especially those who reside nearby.

“We have a number of supporters who live in the neighborhood [and they] reached out to us and asked for help,” Fine said.

“It’s already a landmark in most people’s minds, so we just want to make it official,” Hixon said.

As the quest for historic-cultural monument designation winds its way through the halls of local government, Fine said there will be in-person support as well.

“We’ll definitely have a good crowd of people there, as well as when it gets to City Council for sure. Through our supporters and social media, we’ll be encouraging our supporters to attend and send emails and letters in support,” Fine said.

Given the outpouring of encouragement from the public and the agreement from Cultural Heritage Commission staff, Hixon said he’s optimistic the motion will be approved and sent to the council for consideration.

The timing couldn’t be better for a Los Angeles landmark to be recognized as such, Hixon said.

“Given that St. Patrick’s Day is coming up, I think it’s kind of fitting that this hearing is in March,” he said.

Move it again or demolish it and move on. It’s no historic monument.

Where will the hearing be held?

We need to stop destroying our history. It’s an epidemic and it needs to stop. We are losing our charecter.