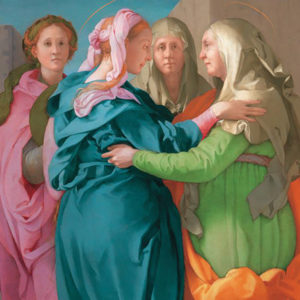 “It is a privilege to bring the ‘Visitation,’ one of Pontormo’s supreme masterpieces and one of the most enigmatically beautiful paintings of 16th-century Italy, to Los Angeles. This is the first time this painting has traveled to the United States. It is one of those exceptional paintings that, once seen, will never be forgotten, and I have no doubt it will be a revelation to our visitors both for its striking beauty and for its moving depiction of a key episode in recognition of Christ’s coming,” said Timothy Potts, director of the Getty Museum.

Organized by the Getty Museum in conjunction with the Gallerie degli Uffizi in Florence and the Morgan Library & Museum in New York, the exhibition looks into Pontormo’s innovative oeuvre as a painter both of devotional subjects and of portraits.

Over 6 feet tall, “Visitation” depicts Mary’s meeting with her cousin, Saint Elizabeth, when both were expecting their sons, Jesus Christ and John the Baptist. First recorded in 1677 by the historian Giovanni Cinelli, the painting remained virtually unknown until its rediscovery in 1904 in the small parish church of Carmignano, a hill town west of Florence.

The recent restoration of the panel brought to light important information about the artist’s technique that illuminates the artist’s creative process. “Visitation” is shown alongside the only known preparatory drawing for it, on loan from the Uffizi, as well as two painted portraits and their related drawings.

“By presenting the ‘Visitation’ and two portraits produced in the same years alongside their preparatory drawings, this exhibition gives us a rare opportunity to reconsider Pontormo’s artistic evolution at a crucial stage in his career,” said Davide Gasparotto, senior curator of paintings at the Getty Museum. “It is especially moving to think of a great master like Pontormo working at the height of his skill during such a tumultuous period, when his city was under siege. His elegant and accomplished work from this era is imbued with a compelling vulnerability and sentiment.”