Olympic Division detectives are seeking the public’s help in identifying two armed robbery suspects, one male and the other female, whose images were caught on security camera video during separate hold-ups. 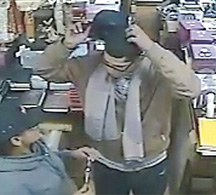 Two suspects (bottom, left) who robbed businesses in Koreatown in January were captured on security camera video. (photo courtesy of the LAPD)

On Jan. 5 at approximately 1:23 p.m., the suspects entered a Catholic church supply store in the 3600 block of West Olympic Boulevard. They browsed merchandise for a short time before the male suspect pointed a handgun at a clerk and forced her into a rear office. The female suspect also forced a customer into the office.

The male suspect watched over the victims in the office while the other removed jewelry. Both suspects fled on foot. No injuries were reported.

On Jan. 17 at approximately 12:20 p.m., the same female suspect entered a shoe store in the 4200 block of Third Street and pretended to browse merchandise. Shortly afterwards, the male suspect entered and pointed a small black handgun at a clerk. The suspects forced the clerk into a storage area and stole property before fleeing.

Both stores are Korean-American-run businesses and are locked during normal business hours. Customers must be let in by the clerks or have appointments to enter. In both robberies, clerks allowed the suspects to enter the stores.

The security camera video can be viewed by visiting lapdonline.org. Anyone with information is urged to call Det. Brian Calicchia at (213)382-9466. During weekends and off-hours, call (877)LAPD247.