A 33-year-old male defendant pleaded not guilty on Jan. 31 to two counts of premeditated attempted murder for allegedly attempting to run over two congregants from a La Brea Avenue synagogue with his car last November. 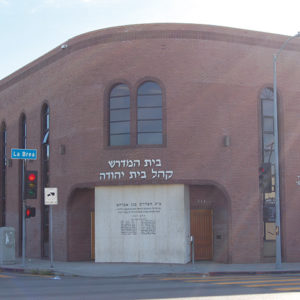 The Los Angeles County District Attorney’s Office has filed attempted murder charges against a man who allegedly tried to run over two congregants outside a La Brea Avenue synagogue in November. (photo by Edwin Folven)

The defendant, Mohamed Abdi Mohamed, also faces two felony counts of assault with a deadly weapon with the special allegation the attack was a hate crime. He previously pleaded not guilty to those charges.

Mohamed was allegedly driving south on La Brea Avenue at approximately 9:30 p.m. on Nov. 23 when he stopped and yelled anti-Semitic slurs at two members of the Bais Yehuda temple near the corner of Oakwood and La Brea avenues. Mohamed allegedly then drove his car toward the two men, who ran in different directions and were not struck by the vehicle.

Prosecutors allege Mohamed then made a U-turn and attempted to drive toward the victims again but struck a parked vehicle. Witnesses called 911 and Mohamed was arrested at the scene.

Mohamed, a U.S. citizen who emigrated from Mogadishu, Somalia, in the 1990s and most recently lived in Seattle, has remained in custody since Nov. 23. He allegedly rented a car and traveled to Los Angeles the week prior to the attack.

The defendant is next scheduled to appear in court on Feb. 22 in Department 34 of the Foltz Criminal Justice Center. He faces life in state prison and is being held on $1 million bail.

Singer greeted by cheers in WeHo after assault in Chicago