Andy Warhol’s life ended Feb. 22, 1987, and his art and likeness still live on. It’s been 32 years since he’s been gone and artists still capture his image in art. That is why a new art gallery, RWall d’Art Gallery, is featuring for a limited time, from Feb. 22 to March 21, the viewing of sculpture of Andy Warhol. 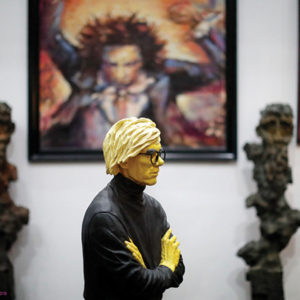 The artist of the Warhol sculpture is Jack Dowd of Sarasota, Florida.

“This sculpture was created to commemorate Andy Warhol, the great American pop artist and his provocative accomplishments,” he said. “He carefully cultivated his public persona as a superstar while exploring America’s obsession with celebrity. Warhol’s prediction, ‘In the future everyone will be famous for 15 minutes,’ seems to have been prophetic of today’s culture of reality TV, YouTube and media feeding frenzies,” Dowd said.

Warhol was an American artist and a leading figure in the visual art movement known as Pop art. His works explore the relationship between artistic expression, celebrity culture and advertisement that flourished by the 1960s. After a successful career as a commercial illustrator, Warhol became a renowned and sometimes controversial artist.

The gallery is located at 350 N. Canon Drive in Beverly Hills.

CicLAvia returns for first time in 2019