The Milky Way restaurant, formerly run by the late Leah Spielberg Adler, will reopen on Monday, Feb. 18, almost two years after its founder died at the age of 97. 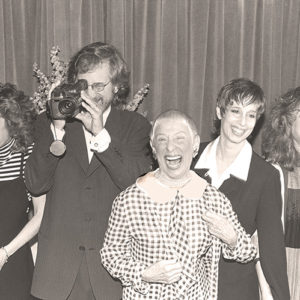 The Milky Way, a restaurant founded and operated by the late Leah
Spielberg Adler, center, will feature memorabilia from her children,
including producer Steven Spielberg, behind the camera. (photo courtesy of The Milky Way)

Adler opened The Milky Way with her husband Bernie in 1977 and the kosher dairy restaurant quickly became a staple of the Pico-Robertson neighborhood. Adler, who was referred to as LeeLee, was a concert pianist and artist, and mother of Steven, Nancy, Anne and Sue Spielberg. The restaurant featured a memorabilia-filled room with items from her famous family, including producer Steven Spielberg.

Following her passing in February 2017, The Milky Way closed to respect her memory. Now, the Spielberg family is ushering in a new era for The Milky Way with a new look and an updated menu.

“Our mom had a gypsy spirit that was larger than life itself, with an unstoppable energy and a fiery confidence that was reflected in the halls of The Milky Way,” the Spielberg family said in a joint statement. “LeeLee opened the restaurant with the vision of offering fine kosher food to the Jewish community in Los Angeles at a time when such a thing didn’t exist. Though her passing left a deep void in our hearts, we hope the new Milky Way will not only honor her memory, but also give back to the community she loved so deeply.”

Executive chef and restaurant consultant Phil Kastel, of PK&J Hospitality Group, is the creative chef at The Milky Way. He was tasked with redesigning the space, updating the menu and paying homage to Adler’s legacy and tastes.

The 2,600-square foot restaurant seats 50 guests in the main dining room. Six horseshoe booths have been redone with shades of blue, paying homage to one of Adler favorite colors and the fact that she frequently wore blue jeans. Banquet seating is also included and the restaurant’s renovated bar features wine and beer.

Additionally, the little touches that honored the Spielberg children still remain. The hallways are lined with movie posters from “Big,” “E.T. the Extra-Terrestrial,” and “Above and Beyond,” as well as family photos. A bench alongside a piano invites diners to sit and watch a tribute video.

“The Milky Way may be a kosher dairy restaurant, but it is also a New American Kosher restaurant,” Kastel added. “We wanted to create an inclusive and welcoming place for everyone, regardless of their faith or adherence to a specific dietary restriction. What will resonate with diners most is just how comforting the food here is. All the dishes on the new menu honor LeeLee and her unique tastes and are updated but true to her legacy at the same time.”

The Milky Way is located at 9108 Pico Blvd. For information, visit milkywayla.com.

Year of the Pig celebrated at the Farmers Market, Grove