West Hollywood Sheriff’s Station deputies arrested a 36-year-old man on Feb. 8 for impersonating a peace officer and are asking anyone who may have been victimized by the suspect to notify investigators. 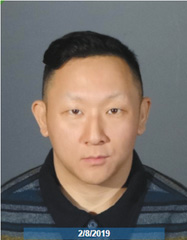 A booking photo of Daniel Sohn, who allegedly impersonated a police officer, was released in an effort to determine whether he is responsible for other crimes. (photo courtesy of the LASD)

Deputies on routine patrol found the suspect, Daniel Sohn, sleeping in a vehicle parked in the 1200 block of North La Brea Avenue at approximately 12:10 a.m. Sohn was parked in a lot where overnight parking is prohibited, and deputies saw he was wearing a T-shirt with an LAPD logo on the front and patches on the sleeves.

Authorities recognized Sohn from a recent video posted on social media which shows Sohn claiming to be a police officer and taunting a group of protesters at a Black Lives Matter demonstration in January.

Based on the video and information the suspect provided to deputies, he was arrested for impersonating a police officer. Deputies also verified with the LAPD that Sohn is not a department employee and the shirt he was wearing was not official LAPD apparel.

Sohn allegedly admitted to investigators that he dresses as an officer to gain respect. Police believe he may have been involved in other potentially criminal incidents.

Sohn was booked at the West Hollywood Sheriff’s Station and released on Feb. 9 on $2,500 bail.

Anyone with information is encouraged to call West Hollywood Sheriff’s Station detectives at (310)855-8850. Anonymous tips can be made to Crime Stoppers by calling (800)222-TIPS or visiting lacrimestoppers.org.