Updated on Feb. 15 at 9:45 a.m.: Wilshire Division detectives have arrested security guard Edduin Zelayagrunfeld, 44. He was booked for felony assault with a deadly weapon with a firearm.

Police are investigating a shooting on Feb. 14 in the 7600 block of Beverly Boulevard in which a security guard allegedly shot a woman who was filming in front of a synagogue. 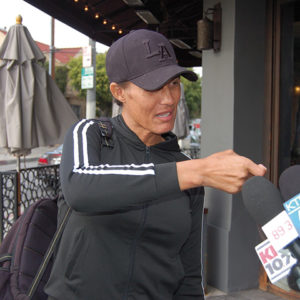 Shooting victim Zhoie Perez demonstrated how a security guard pointed his gun at her. (photo by Edwin Folven)

LAPD spokesman Barry Montgomery said Wilshire Division officers received a call at 12:20 p.m. about a disturbance outside Congregation Etz Jacob at 7629 Beverly Blvd. As officers were responding, they received a report that a shooting had occurred.

Police found the victim near the corner of Beverly Boulevard and Stanley Avenue. She was transported to Cedars-Sinai Medical Center and treated for a graze wound to her right leg. After she was treated, police later drove the victim back to the site of the shooting and released her, per her request.

Montgomery said the unidentified security guard was detained for questioning, and the investigation is ongoing. He said anytime a gun is discharged in public, police protocols call for an investigation. 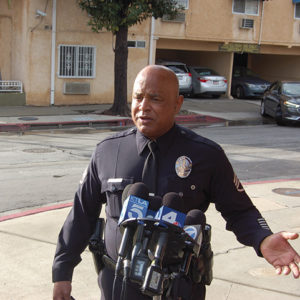 LAPD spokesman Barry Montgomery said the shooting is under investigation and encouraged any witnesses to notify police. (photo by Edwin Folven)

The victim, who gave a statement to the media, identified herself as Zhoie Perez. She said she is a member of a group known as First Amendment Audit, whose members gather outside public buildings with cameras and photograph and videotape everyday activity. The group’s activity sometimes prompts people to call police, and members film their encounters with officers. The videos are then posted on YouTube and social media sites.

While Perez admitted to being a member of First Amendment Audit, she said she was filming the front of the synagogue as a private citizen because she liked designs on a wrought-iron fence in front of the temple, which also operates a day school at the site. The security guard is employed by the temple.

Montgomery said detectives have been tasked with determining what happened, and there is no timeline for how the investigation will take. Police are seeking information from anyone who witnessed the shooting, and urged to call Wilshire Division detectives at (213)922-8205.