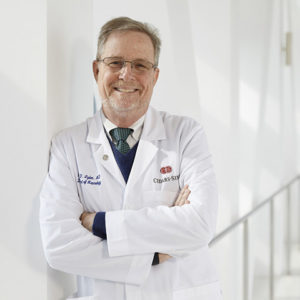 The honor, which recognizes significant contributions to the investigation and management of clinical research in stroke, will be awarded Feb. 6 at the International Stroke Conference in Honolulu. Lyden, the Carmen and Louis Warschaw Chair in Neurology at Cedars-Sinai, will present a lecture there on thrombolytic therapy for ischemic stroke.

In the late 1980s, Lyden, then at the University of California, San Diego, studied tPA, tissue plasminogen activator, in preclinical studies, and he was one of the top patient enrollers for the trial that led the Food and Drug Administration to approve the “clot-busting” drug in 1996. When administered soon after stroke onset, tPA sometimes can clear a blocked artery, restore blood flow to the brain and reverse the stroke’s effects. More than 20 years later, studies continue to show tPA’s long-lasting, life-saving benefits.

Lyden also was instrumental in refining the National Institutes of Health Stroke Scale, a measure for quantifying stroke severity, and he shared a prestigious CINE award with the National Institute of Neurological Disorders and Stroke for producing and directing NIHSS training and certification videos. Translated into 20 languages, the programs have been viewed by 2 million doctors, nurses and emergency medical technicians around the world.

Midori A. Yenari, MD, a vascular neurologist and professor of Neurology at the University of California, San Francisco, nominated Lyden for the award, saying she first met him when she was a beginning stroke fellow, and he profoundly influenced her career.

In 2009, Lyden joined Cedars-Sinai to become the medical center’s first chair of the Department of Neurology, elevating the Stroke Program to a national leadership level. Three years later, Cedars-Sinai became one of the first five medical centers in the nation and the first in Los Angeles to be certified as a Comprehensive Stroke Center by The Joint Commission and the American Heart Association/American Stroke Association. More than 1,000 acute stroke patients are seen at Cedars-Sinai each year, and the Stroke Program consistently earns highest performance awards from the AHA/ASA.