Through phone calls, letters and a neighborhood petition, Hollywood Hills resident Federico Fichtl spent nearly seven years imploring the LAPD, the city attorney’s office, his councilman and the mayor’s office to take a harder stance against the loud, extravagant parties on his street. He and his neighbors throughout the hills were happy the Los Angeles City Council finally passed a law last April that results in up to $8,000 in fines for the hosts who repeatedly hold loud and unruly gatherings. 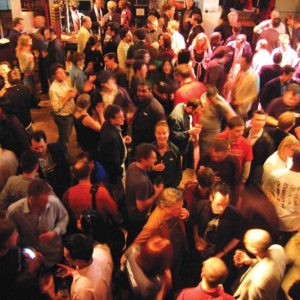 Parties drawing large crowds in the Hollywood Hills drew the ire of residents for years before the L.A. City Council instituted steep fines for repeat offenses. (photo from Flickr)

Almost one year since its passage, the law has helped police and the city attorney’s office curb the loud music, congested streets, public drunkenness and other symptoms of nuisance parties, but the same issues continue to linger for some residents throughout the hills.

“This is going to continue,” said Fichtl, who has lived on North Curson Avenue for 45 years. “It goes away for awhile and then comes back.”

Anastasia Mann, president of the Hollywood Hills West Neighborhood Council, said the ordinance has been “extremely effective” in some cases, but for others “the party houses are as bad as ever, frankly.” She said an Uber driver told her that he had recently been in her neighborhood for a house party he heard about on social media that was charging a $100 cover.

LAPD logs show 1,618 calls to police about parties in 2018, with the new ordinance in effect for eight months of the year. From 2010-17, an average of 2,605 such calls were made each year. To date, approximately seven citations have been issued by LAPD under the new Party House Ordinance.

Based off referrals from LAPD Hollywood Division from 2015-18, the city attorney’s office has handled six cases that resulted in misdemeanor filings, three cases that are currently under review and six cases sent to hearing. Twenty-two nuisance letters were issued.

“We noticed a huge drop in some of the infamous party houses throughout the Hollywood Hills,” said L.A. City Councilman David Ryu, 4th District, who authored the law.

The councilman said there were a few houses in the Hollywood Hills for sale after the ordinance went into effect, with owners realizing they would have a harder time using their properties as de facto nightclubs. For the issues that persist, Ryu said he would be “more than open” to any revisions to the law that LAPD or the city attorney’s office might recommend. But the law is still new and police are still learning the ins and outs.

Officer Brian White, one of the senior lead officers in Hollywood Division assigned to the Hollywood Hills, said it took several months for police to establish enforcement policy after the ordinance was passed. A few officers were trained for a pilot program before the training was extended to officers throughout the department.

Through the end of March 2019, 29 citations have been issued to seven different properties throughout the Hollywood Hills, Hollywood Division data shows, including one house on Los Tilos Road that has racked up 12 citations. Of the 29, White said at least a couple were cited incorrectly and then reclassified under a different noise ordinance section; “part of the learning process,” he said. A records request to confirm how much money in citations each of the properties has accumulated is pending.

Another one of the challenges in the first year of enforcing the new law, he added, include Airbnb guests who rent properties and throw parties with no knowledge of, or no regard for, the law.

“For them, a first time fine of $100 isn’t that big a deal,” White said, referring to the initial penalty violators of the ordinance receive.

White said fines have not been a deterrent for people who sublease properties and throw loud parties as they’re in the process of being evicted, since they’re not going to be there much longer to deal with the consequences.

“Each individual property has its own challenges,” White said.