Beverly Hills Vice Mayor John Mirisch once said Nate ‘n Al leaving Beverly Hills would be like the Dodgers leaving Brooklyn. After about a year of its rumored closure, the city of Beverly Hills has reached an agreement to keep one of the region’s most famous delicatessens in Beverly Hills for the foreseeable future. 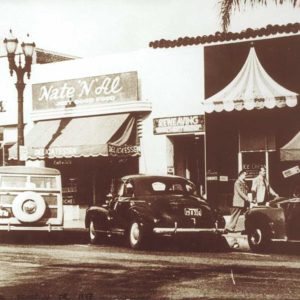 After a year of rumors about its possible closure, Nate ‘n Al will move to a new location in the triangle under a 10-year lease. (photo courtesy of Nate ‘n Al)

The city of Beverly Hills has entered into a lease agreement with Circus Clowns LLC, a company backed by music executive Irving Azoff, that will move Nate ‘n Al from its current spot at 414 N. Beverly Drive to an 8,806-square-foot space at 443 N. Canon Drive. Wolfgang’s Steakhouse will be moving out of that location.

“Nate ‘n Al’s is part of the heart and soul of our community,” Beverly Hills City Councilwoman Lili Bosse said. “It truly is family and beloved. We are all truly grateful that this cherished gem will stay in our city.”

Terms of the 10-year lease include a base rent of $52,836 per month, a monthly common area maintenance payment of $3,522 and an annual base rent escalation of 3 percent.

Mark and David Mendelson are the third-generation owners of Nate ‘n Al. Their grandfather opened the deli in 1945, before Beverly Hills grew into an affluent destination for residents and tourists, and it quickly became a hangout for writers, actors and entertainment industry executives. Larry King, one of the deli’s many famous customers, made a public plea last year for someone to step in and keep it in business.

The Mendelsons have not commented publicly about the new lease agreement and move. A public relations representative for Nate n’ Al did not respond to a request for comment. Members of the ownership group, in addition to Azoff, reportedly include United Talent Agency agent Jay Sures, real estate developer Mike Meldman and nightlife industry entrepreneur Rande Gerber, along with his wife Cindy Crawford.

“Nate’n Al has a 70-year history on Beverly Drive in the Business Triangle,” Logan Phillippo, a city policy and management analyst, said in a report to the council. “The restaurant serves deli classics and focuses on bringing family and friends together in its simple diner atmosphere.”