The Los Angeles City Council approved an ordinance on Feb. 12 requiring new contractors seeking to conduct business with the city to disclose any ties they have with the National Rifle Association. 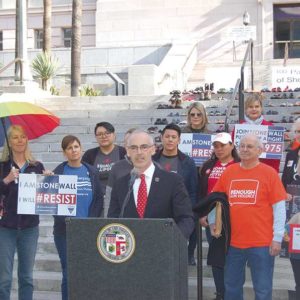 Councilman Mitch O’Farrell discussed the city’s ordinance requiring contractors to disclose ties to the NRA at a rally with gun violence prevention advocates at City Hall. (photo by Edwin Folven)

The ordinance was spearheaded by Councilman Mitch O’Farrell, 13th District, who said the new law will “daylight” the NRA’s influence on private companies and organizations. O’Farrell’s motion cited a Center for Responsive Politics report stating, “The NRA’s spending on political activities from 1998-2017 aggregated to over $200 million.” The law was approved two days before the 1-year anniversary of a mass shooting at Marjory Stoneman Douglas High School in Parkland, Florida, in which 17 people died.

Parkland, Florida, one year ago, we must continue to keep in mind that the NRA spends millions of dollars at every level of government to block any type of gun safety legislation,” O’Farrell said. “Our residents deserve transparency related to any ties the NRA may have to the city of Los Angeles.”

O’Farrell joined anti-gun violence advocates at a rally outside City Hall on Tuesday, prior to the council approving the ordinance. One hundred pairs of shoes were placed on South Lawn steps at City Hall to symbolize the 100 victims who lose their lives each day because of gun violence. Suzanne Verge, president of the Los Angeles chapter of the Brady Campaign, said she knows the tragedy gun violence causes. She lost her brother Eugene at the hands of a gunman in 1978 and still has painful memories.

“My brother was 18 years old when he was shot and killed in Santa Monica. My brother was dating this girl who knew this guy and they were staying the weekend at his house. He shot my bother and held the gun on her,” Verge said. “It’s something you never forget. Nobody should have to go through this.”

The ordinance will require contractors, through a signed affidavit, to disclose connections with the NRA. If ties to the organizations are disclosed, the city reserves the right to end the contract. Councilman Paul Krekorian, 2nd District, chair of the council’s Budget and Finance Committee, helped initiate the policy.

“Every day in America, thousands of lives are cut short or changed forever by gun violence,” Krekorian said. “People are fed up with the carnage, and they can no longer sit idly by and ignore this epidemic. We’ve seen an incredible surge in activism since the tragic shooting at Marjorie Stoneman Douglas High School last February. People across the nation are organizing to demand action and shift America’s gun politics. But the NRA continues to spend millions of dollars to influence the democratic process and thwart common sense gun safety reforms that would keep the public safe.”

The ordinance will apply to new contractors and has exemptions for entities with contracts involving pension funds and city trust money or bond proceeds. O’Farrell said he does not know of any existing contractors who may have ties to the NRA but the ordinance will help identify them going forward.

Requests for comment to the NRA and its local representative, the California Rifle and Pistol Association, were not answered. O’Farrell said he expects the NRA to file a lawsuit against the city over the ordinance but has consulted with the city attorney’s office, which has assured him the ordinance will withstand legal challenges. The new ordinance follows previous laws requiring contractors to disclose ties with any entities with links to construction of a border wall or slavery.

“I applaud Councilman O’Farrell’s leadership on the ordinance requiring city contractors to disclose sponsorship of the National Rifle Association,” said Los Angeles City Attorney Mike Feuer. “The ordinance appropriately advances a level of transparency all of us should support.”

However, some legal experts questioned the constitutionality of the ordinance. UCLA law professor Eugene Volokh said prior rulings by the U.S. Supreme Court call the city’s law into question.

“The Supreme Court has made clear [in O’Hare Truck Service, Inc. v. City of Northlake (1997)] that the First Amendment generally bans the government from “retaliat[ing] against a contractor, or a regular provider of services, for the exercise of rights of political association,’ precisely what the ordinance implicitly threatens,” Volokh said in a statement posted on his website. “The ordinance violates the First Amendment just because of its disclosure requirement alone. And it also invites First Amendment discrimination lawsuits by individual contractors who are denied contracts after they disclose that they deal with the NRA, just as an employer asking applicants to disclose their religion would invite religious discrimination lawsuits by applicants who aren’t hired.”

O’Farrell defended the ordinance and said he is aware of the NRA’s contention that the new law violates its right to free speech.

“There has been a letter sent to the City Council from the NRA claiming that this ordinance violates the First Amendment. Here’s what I would say to that, ‘We have our rights of free speech as well,’” O’Farrell said. “The public has a right to know, and of course the NRA is suing because that’s what they do. There is one common denominator that is evidenced by violence everywhere in our inner cities, by these mass shootings, by the now 100 deaths by gun violence every day. The common denominator to halting, blocking all efforts to curb those statistics is the NRA. So, of course, they are threatening a lawsuit because that’s what they do. Before this even moved forward, I received the information and the opinion [from the city attorney] that we are standing on firm legal ground.”