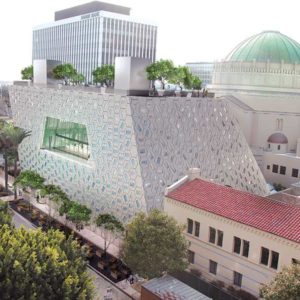 Construction is underway on the new pavilion at Wilshire Boulevard and Harvard Street which will serve as an event space and banquet hall, and a place for special programs. The three-story building will have an arched interior on its first and second floors, and a rooftop terrace. Plans call for the $85 million building to be completed in late 2020 or early 2021.

“We are calling it a modern masterpiece,” said Jamie Geller, campaign associate for Wilshire Boulevard Temple. “It’s going to be such an eye-catcher. If you drive down Wilshire Boulevard, there is nothing like it.”

The pavilion project has been in the planning stages for the past several years with the temple raising money through a capital campaign. It is the final component in a master plan at the temple’s Glazer campus in Koreatown that included renovations to the historic sanctuary and the temple’s two schools, the construction of a new parking structure and the opening of the Karsh Family Social Service Center, where health care, classes and social service programs are provided to the community.

The Audrey Irmas Pavilion will be the first building in Los Angeles by Pritzker Prize-winning architect Rem Koolhaas and OMA partner Shohei Shigematsu. It will include a new chapel and terrace, grand ballroom, meeting rooms, performance spaces and a rooftop sky garden with panoramic views. The pavilion is intended to be an inspiring gathering place for the entire community, hosting religious and cultural activities and performances, said Senior Rabbi Steven Leder.

“In creating the Audrey Irmas Pavilion, we sought a design that would not only create much-needed new facilities, but also embody the vision and intention of our congregation to be a dynamic part of the 21st-century spiritual and cultural conversation that is Los Angeles,” Leder added. “We are thrilled with the dramatic, beautiful and functional design created by Rem Koolhaas and Shohei Shigematsu, and can’t wait to see it realized. We are deeply indebted to Audrey Irmas and the many other contributors who have made this project possible.”

Geller said Irmas, a philanthropist, art collector and longtime temple member, donated $30 million for the new building that will bear her name. The money was generated through the sale of her Cy Twombly painting, “Untitled [New York City],” an example from the artist’s “Blackboard” series. The artwork was sold at auction in 2015 for $70.5 million, and $30 million was donated to Wilshire Boulevard Temple. The temple is still raising money for the pavilion, with $74 million generated to date.

“I am so pleased and happy that the pavilion is finally coming to fruition,” Irmas said ahead of a ground-breaking ceremony for the project in November. “It is something I have dreamed about for the last couple of years and I am thrilled to be part of this.”

Geller said the pavilion will seat up to 1,000 people, and the space can be scaled down to accommodate 500 people at tables.

“If you having a bar mitzvah or a wedding, we will be able to hold those there,” Geller added. “There will be a high-tech theatrical system so movies can be played there along with performances and lectures.”

Wilshire Boulevard Temple is also partnering with the Annenberg Foundation on a space in the pavilion for a center on “purposeful aging.” The center for seniors will offer programs on wellness, creativity, tech exploration, social connections, community engagement and financial education.

“In all of my philanthropic work, I’ve tried to focus not just on giving, but on innovating. That’s why I was so excited to be a part of this new community center,” Annenberg Foundation Board Chair, President and CEO Wallis Annenberg said. “Americans are living longer than ever before. That’s a wonderful thing. It also presents us with an important challenge: how to make those longer lives meaningful and purposeful, so older Americans can keep learning, growing and giving back. In my view, this community center can do an enormous amount to engage and stimulate older Angelenos.”

Koolhaas, whom Geller described as “rock star” architect, and Shigematsu designed the new pavilion with sweeping windows that will create exchanges between the indoors and outdoors.

“The facade itself is so outstanding. Just the outside alone with the amount of windows. During the daytime, light will come through the windows and create an array of images on the floor,” Geller said. “It’s going to be stunning.”

Shigematsu said the building will be like no other along Wilshire Boulevard.

“We wanted to focus on communicating the energy of gathering and exchange. The Audrey Irmas Pavilion is an active gesture, shaped by respectful moves away from the surrounding historic buildings, reaching out onto Wilshire Boulevard to create a new presence,” Shigematsu added. “We are excited to work with Wilshire Boulevard Temple to create a new anchor for the community at large.“

Koolhaas said the new pavilion will build on the temple’s history while moving it toward the future.

“When so many things seem to be pulling us farther apart from each other, the temple is an institution that brings the city closer together in peace,” Koolhaas said. “I congratulate my partner Shohei for his leadership of this project, which we hope will become a home for reflection, love and community.”