Celebrating Los Angeles’ love of both the automobile and Hollywood, the Petersen Automotive Museum will host a parade on Presidents Day, Feb. 18. Featuring iconic Hollywood cars, the parade will be a thank you to the people of Los Angeles for their unwavering support over the past quarter century. 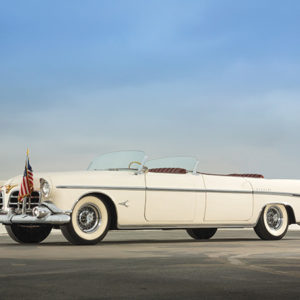 Beginning at 10 a.m. in Playa Vista, the parade route will pass several of the city’s landmarks including the Santa Monica Pier, Rodeo Drive and the Hollywood Walk of Fame. During the route, there will be one planned 20-minute stop at Abbott Kinney Boulevard in Venice, where viewers can take pictures with the parade cars. After the parade, the cars will return to the Petersen at around 1 p.m. and be displayed on the third floor of the museum parking garage.

Viewers positioned around the designated parade route will see the 1951 Chrysler Camera Car once owned by billionaire movie mogul Howard Hughes; the Volkswagen Type 2 Microbus from the 2006 American comedy-drama “Little Miss Sunshine”; the 1998 Volkswagen New Beetle Convertible from the second installment of the Austin Powers franchise “The Spy Who Shagged Me”; the 2002 Jaguar XK-R Stunt Car that was the anti-hero car in the 2002 James Bond flick “Die Another Day”; the Chrysler Imperial Parade Phaeton, which belonged to President Dwight D. Eisenhower; the Honda S2000 from “2 Fast 2 Furious”; and other iconic Hollywood vehicles.

“The Petersen would not be what it is today without the steadfast support of the Los Angeles community,” said Petersen Automotive Museum Executive Director Terry L. Karges. “For 25 years, we have strived as an organization to captivate the hearts of Angelenos, igniting within them a passion for the automobile. Because Hollywood is such an important aspect of our community, the parade will serve as a fun tribute to the industry on which Los Angeles was built upon.”

The Petersen is located at 6060 Wilshire Blvd. For information, petersen.org.

Great, even more traffic over the weekend.