‘How to Train Your Dragon’ ends adequately, not quite amazing

The “How to Train Your Dragon” sequels never surpassed their maiden entry, favoring more juvenile stories as the series progressed. The weird thing is that choice didn’t help the franchise turn a profit, and now what could’ve been forever lingers in the shadows of the trilogy’s conclusion.

Hiccup, Astrid and Toothless share a special moment in “How to Train Your Dragon: The Hidden World.” (photo courtesy of Universal Pictures)

The “Dragon” series started incredibly well with a first entry more lasting and delightful than, dare I say, “Toy Story 3” that same year. Alas, the sequel might’ve been a critical darling, but underperformance put DreamWorks Animation in jeopardy. I don’t imagine “Hidden World” will do much better.

To a degree, it’s a competent send-off to beloved characters, including delightful dragon Toothless, who channels all the best characteristics of a happy dog. But another stock villain and similarly generic action sequences result in too many lackluster displays. The first film features amazing sequences of flight, dashed with some visceral thrills. It even got 3D viewing right, which is an impossible task.

But all those amazing rollercoaster moments and thoughtful CGI have been gone for a while now. Like a superhero film with action sequences more interested in generic spectacle than originality, aerial chase scenes and a finale battle (kind of) occur out of obligation, uninterested in ways to replicate a lost magic.

That’s quite disappointing since the magical first film teases bigger, better stories to come. Certainly, this Viking-dragon world expands, but it resists the grandeur of that initial promise. Plenty of new dragon species arrive, but apparently humans just suck and want to manipulate dragons. That plays an important point throughout “Hidden World,” but it’s still a tired idea the second time around. Even worse, this one hints at a heroic adventure that would finally take us into new territory, narratively and visually.

As we begin, Hiccup (Jay Baruchel) is a year into his new duties as chief. The Viking village Berk is now a refuge for dragons, an overflowing sanctuary quickly becoming a tempting target for all the dragon hunters nearby. Hiccup proposes an extreme solution: everyone, humans and dragons alike, must relocate to a hidden world Hic’s father, Stoic (Gerard Butler), once believed was an ancient dwelling for all those fire-breathers. The quest is set with a new foe, Grimmel (F. Murray Abraham), in hot pursuit to finally complete his life’s mission to kill the last Night Fury.

It’s a premise filled with all the potential of a heroic journey. One problem: that journey stops at the first sight of land, while remaining time is spent on Toothless’ growing relationship with the last female Night Fury, a “Light Fury,” as Astrid (America Ferrera) dubs her. That’s all fine, I suppose, but that could’ve happened on the journey, rather than bringing the story to an abrupt halt. 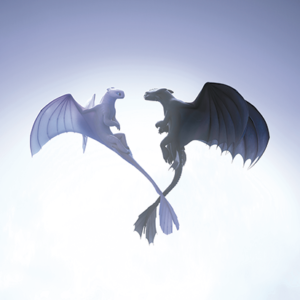 Toothless and the Light Fury are lovable characters in the third installment of the “How To Train Your Dragon” series. (photo courtesy of Universal Pictures)

Another glaring insult to the original: John Powell’s Oscar nominated score becomes background noise. We’re at a tipping point in American cinema. Somehow, great film scores morphed into mood music, divorced from personality and memorable arrangements. Powell scored the entire trilogy, but editing and, I assume, the DreamWorks powers that be lobotomize the music’s personality in service of plotline and computer graphics.

That’s a particular tragedy, since Powell’s original “Dragon” score marks the last great, memorable one in 10 years. It’s hummable, iconic and worth listening to by itself. “Hidden World” buries it all, assuming animated films are only meant for kids who don’t care about such things, which is insulting on several levels.

As a screenplay, sure, “Hidden World” works, from Hiccup and Astrid’s evolving relationship to ample screen time for supporting characters. And it has a clear, definitive conclusion, one that even packs an emotional punch. But it should’ve been so much more. Epic dragon battles and inventive visual spectacle are nowhere to be found. I guess I’ll just have to wait until “Game of Thrones” returns for a better fix.

Craft in America show to focus on works from ‘California Visionaries’