The Hollywood Pantages Theatre has announced the upcoming Broadway in Hollywood 2019-20 season, consisting of eight Los Angeles premieres, all direct from Broadway. The season begins with the Los Angeles engagement of “Anastasia” in October 2019. 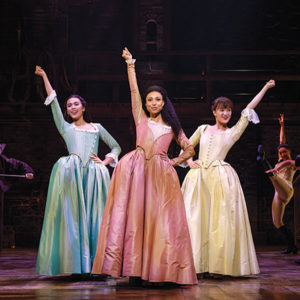 “Hamilton,” which returns to the Hollywood Pantages Theatre in March 2020, tells the story of Alexander Hamilton with a score that blends hip-hop, jazz, blues, rap, R&B and musical theater. (photo by Joan Marcus)

This season will mark the first time Los Angeles Theatre audiences will have regular access to Broadway National Tours at both the Pantages and Dolby Theatres in Hollywood.

“Hollywood is the entertainment capital of the world and we are so excited to now be presenting shows at two iconic venues less than a mile apart from each other on Hollywood Boulevard,” said Jeff Loeb, general manager for the Pantages Theatre. “We are so excited to present the best of Broadway in the heart of Hollywood.”

Pantages Theatre will play host to the first three shows of the new 2019-20 season. Following “Anastasia,” Disney’s “Frozen,” last year’s biggest Broadway musical hit, will cast an icy spell across Los Angeles during the holiday season. Donna Summer, the disco icon with the voice from heaven, will have her story come to life in the most electric way possible when “Summer: The Donna Summer Musical” makes its L.A. debut.

The record-breaking new musical “Mean Girls,” based on the hit film, will continue the Broadway in Hollywood season at the Dolby Theatre. Other shows at the Dolby Theatre include Jimmy Buffett’s “Escape to Margaritaville,” Lerner & Loewe’s “My Fair Lady,” “The Spongebob Musical” and “The Band’s Visit.”

Finally, “Hamilton” will return to Los Angeles at the Pantages in March 2020 as an additional event. Season ticket holders who purchase a 2019-20 season package will have priority access to “Hamilton.”

Buddhist imagery and figures on view at Japan Foundation