An eight-story hotel under construction in Hollywood has some Los Angeles residents less than thrilled.

The project, which is called the Selma Wilcox Hotel due to its location at the corner of West Selma and North Wilcox avenues, plans to have 114 rooms, a restaurant and bar on the ground floor and a rooftop terrace. 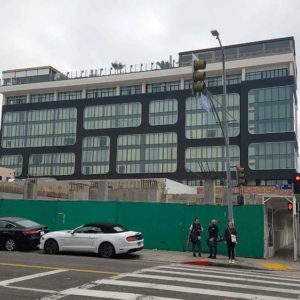 A hotel planned for the corner of West Selma and North Wilcox avenues has drawn opposition and appeals after approval by the Planning Commission. The project goes before the Los Angeles City Council March 5. (photo by Cameron Kiszla)

Casey Maddren, an opponent of the project, said neighbors have issues with environmental concerns and a lack of parking.

Maddren said the project would also add yet another bar in an area that is already full of places that sell alcohol.

“Hollywood has the second-highest alcohol density in the city of L.A.,” said Maddren, who also serves as president of United Neighborhoods for Los Angeles.

In addition, Maddren claims those behind the project are building a series of five “party hotels” ­– the Selma Wilcox Hotel, the Dream Hotel two doors down at 6417 W. Selma Ave., the Tommie hotel at 6516 W. Selma Ave., the Thompson Hotel at 1541 N. Wilcox Ave and another planned hotel at 1600 Schrader Blvd. – within a block of the intersection of Selma and Wilcox avenues.

Amie Marben, director of development for Relevant Group, said the Selma Wilcox Hotel has no relation to the Dream Hotel or any of the other nearby hotels currently planned or under construction.

On the project’s developer’s website, Relevant Group advertises the new hotel as being close to the Dream Hotel in Hollywood and trendy restaurant TAO Los Angeles.

The Dream Hotel in particular is a sticking point for many of the opponents of the project, who claim the 178-room, nine-story building can be a nuisance.

Videos uploaded to YouTube purport to show the Dream Hotel at night from Whitley Heights, where bright lights can be seen and the music can be heard well enough to make out the lyrics.

Deborah Belgum, a Whitley Heights resident, said she’s concerned about the rooftop terrace of the Selma Wilcox Hotel because it might add to the din of the Dream Hotel’s rooftop pool parties.

She said she can hear the music, and specifically a thudding bass, on summer afternoons at her home nearly three quarters of a mile away from the site of the proposed hotel.

Belgum said she reached out to management at the Dream Hotel who promised to lower the volume, but the slight change hasn’t been enough to ease her afternoons. She said she fears this new hotel could only make the problem worse.

“It’s basically disturbing the peace. There needs to be some regulations about rooftop hotels having parties that disturb the peace,” she said.

In the immediate vicinity of the hotel, the music can’t be heard, she said, and only at a distance does the sound affect several hundred homes in the hills.

Marben declined to comment on potential sound-dampening measures for the rooftop terrace, but the conditions of approval from the city’s Planning and Land Use Management Committee require “noise-attenuating features” to prevent sounds from going beyond the property line.

Maddren is one of four people and groups appealing the Los Angeles Planning Commission’s approval of the project.

The project will come before the Los Angeles City Council on Tuesday, March 5, during which the appeals will be considered.

Maddren said if the council approves the project, he plans to file a lawsuit.