The 91st Academy Awards will be held Sunday, Feb. 24, at the Dolby Theatre on Hollywood Boulevard.

To accommodate setup for the Oscars and red carpet, a stretch of Hollywood Boulevard between Highland Avenue and Orange Drive was closed Feb. 17. It will remain blocked off until 6 a.m. Wednesday, Feb. 27. 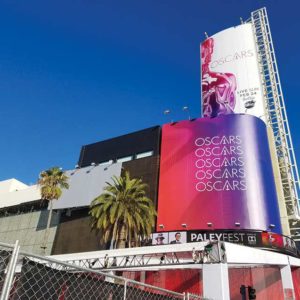 The 91st Academy Awards are Sunday, and several streets and sidewalks in Hollywood will be closed for setup and the Oscars. Cityline, the city of West Hollywood’s free shuttle for neighborhood destinations, will also see some changes. (photo by Cameron Kiszla)

Sections of Orange Drive, Highland Avenue, Hawthorn Alley, Hawthorn Avenue, Orchid Street, Orchid Alley and some of the sidewalks alongside those streets will be closed leading up to the Oscars.

In addition, subway trains will not stop at the Hollywood and Highland station Feb. 24. Service will resume at 6 a.m. Feb. 25.

Cityline, the city of West Hollywood’s free shuttle for neighborhood destinations, will also see some changes.

Cityline will relocate its Hollywood and Highland stop to the front of the Hollywood Roosevelt Hotel on Orange Drive, just south of Hollywood Boulevard, from Tuesday, Feb. 19, through Tuesday, Feb. 26.

In addition, the Cityline West Hollywood Library stop will be out of service after 6 p.m. on Tuesday, Feb. 26.

Riders can board Cityline at the next closest stop located at the southeast corner of Santa Monica and San Vicente boulevards to reach intended destinations.

County to look at creating department for older adults