The Geffen Playhouse has extended the production of “Lights Out: Nat ‘King’ Cole” through March 24 at the Gil Cates Theater. 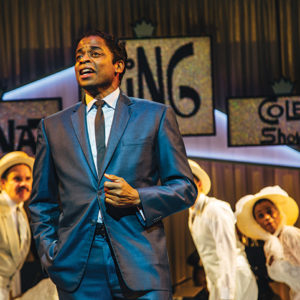 Dulé Hill stars as Nat King Cole in the West Coast premiere of “Lights Out: Nat ‘King’ Cole” at the Geffen Playhouse. (photo by Jeff Lorch)

In this exploration into the soul of an American icon, writers Colman Domingo and Patricia McGregor imagine Cole as he faces the final Christmastime broadcast of his variety show and weighs the advice of his friend Sammy Davis Jr. to “go out with a bang.” Cole’s hit songs, such as “Nature Boy,” “It’s a Good Day” and “Smile,” underscore this homage to the renowned performer who struggled to break through America’s color barrier in the early days of television.

Tickets start at $30. Rush tickets for each day’s performance are made available to the general public 30 minutes before showtime at the box office, and are $35 for general admission and $10 for student admission.

The Gil Cates Theater at the Geffen Playhouse is located at 10886 Le Conte Ave. For information and tickets, visit geffenplayhouse.org, or call (310)208-5454.