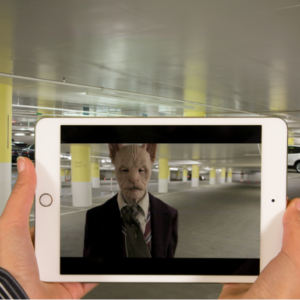 Accessed on iPad Minis and headphones and featuring LA Phil musicians, the Cardiff and Miller artwork takes visitors on a dreamlike trip through the spaces of the Disney Concert Hall, revealing an otherwise invisible world complete with a hypnotic 3D sound environment.

“Thought Experiments in F# Minor” features original music by Ellen Reid. Yuval Sharon, currently in residence as artist-collaborator of the LA Phil, served as curator for the work.

The 40-minute artwork will be offered during the same hours as The Music Center’s self-guided audio tour of the concert hall, from 10 a.m. to 2 p.m. on most days.

“During our centennial, we’re celebrating all aspects of the LA Phil, including Frank Gehry’s brilliant architectural design for Walt Disney Concert Hall,” said Simon Woods, CEO of the LA Phil. “We feel there can be no better way to honor Gehry’s artistry than by asking other artists to add their perspectives.”