The Los Angeles Museum of the Holocaust, in conjunction with The Institute for Visual History and Education, also known as the USC Shoah Foundation, presents the West Coast premiere and exclusive limited engagement of USC Shoah Foundation’s award-winning virtual reality film “The Last Goodbye.” 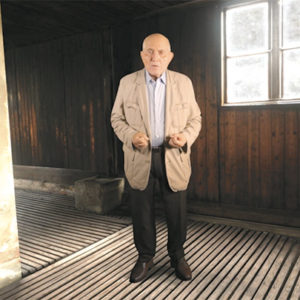 Holocaust survivor Pinchas Gutter takes viewers through the Majdanek Nazi death camp in Poland in the film “The Last Goodbye” at the Los Angeles Museum of the Holocaust. (photo courtesy of LAMOTH)

The film features survivor Pinchas Gutter’s visit to the site of the Nazi death camp Majdanek in Poland. Gutter is the only member of his family of four to have survived the Holocaust. The precedent-setting, fully immersive experience enables viewers to virtually visit the site with Gutter as he travels in life-sized projections through the railway car, gas chamber, shower room and barracks of Majdanek seven decades later.

First screened at the 2017 Tribeca Film Festival, the 17-minute film is now available to visitors to Los Angeles Museum of the Holocaust during regular hours. After putting on an audio-visual headset, viewers virtually accompany Gutter through the concentration camp while listening to his narration. Room scale virtual reality allows users to walk around and explore the virtual environment.

“We rely heavily on survivor oral testimonies in teaching Holocaust history throughout our galleries,” said Beth Kean, executive director of Los Angeles Museum of the Holocaust. “Now, our visitors’ experience will be further enhanced by the opportunity to virtually accompany Pinchas Gutter on his journey through Majdanek and be confronted with the remains of a concentration camp.”

“Every generation needs to bear witness to these atrocities, but our tools for learning and preservation change. We felt that producing the first Holocaust survivor testimony in room scale VR would engage audiences in understanding the nature of the Nazi concentration camp system where the SS authorities could murder targeted groups,” said USC Shoah Foundation Finci-Viterbi Executive Director Stephen Smith, who is also one of the film’s producers. “The ramifications of such human behavior continue today, and one way to counter that devolution is to understand it by gazing an unflinching eye upon it.”

The film has received numerous awards, including two Webby Awards, the Creative Arts Award, VR-Documentary Jury Prize at the 2018 Lumiere Awards, and the Shots Gold Award, selected by an international panel of judges, for best new use of emerging technology.

The museum, located at 100 The Grove Drive, is open 10 a.m. to 5 p.m., Saturday-Thursday; 10 a.m. to 2 p.m., Friday. Museum admission is free. Tickets for the film are $15 and can be purchased at the door or in advance by visiting bookwhen.com/thelastgoodbye. For information, visit lamoth.org.

Join the fight to end genocide at upcoming 5K walk