During awards season, how well has ‘Green Book’ aged?

“Green Book” masks itself as a champion of inclusion, a buddy flick set during the civil rights movement. What makes this one and its ilk so dangerous is quite simple: easy answers, simple solutions to prejudice so enticing Oscar can’t help but decree them worthy awards contenders. 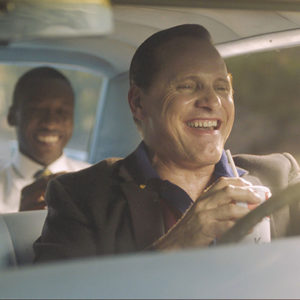 Mahershala Ali stars as Dr. Don Shirley and Viggo Mortensen as Tony Lip in “Green Book,” a well-crafted melodrama that could have taken a more thoughtful approach to its subject matter. (photo courtesy of Universal Pictures)

“The Blind Side,” “The Help,” “Crash” and now “Green Book” present juvenile examples of bigotry: white folks overtly yelling racial slurs or denying people access to basic services and care. Even worse, “Green Book,” like its predecessors all written and directed by white creators, is an incredibly well-crafted piece of melodrama, bathed in high degrees of pathos to lull viewers into a trivial narrative that wraps things up with the audacity of a Hallmark film.

And like too many social issue films, “Green Book” prefers to focus on a white hero, not the black protagonist the story should feature. Tony Lip (Viggo Mortensen), an Italian-American racist in New York, functions as the audience’s point of entry. All major events unfold through his perspective, and viewers have little choice but to empathize with him, his prejudices and his enormous appetite (prepare for a white man to teach a black man how to eat fried chicken).

Dr. Don Shirley (Mahershala Ali, nominated for supporting actor, not lead) is the film’s anomaly, a black pianist with several doctoral degrees, ready to perform in the Deep South on principle. But fearing he may encounter the same resistance Nat King Cole once did, he needs Tony to protect him on an Odyssean journey through the racist underworld. Don eventually receives a degree of character development, but redemption for Tony is the goal.

Somehow “Green Book” combines “Driving Miss Daisy” and “Pygmalion” as the Doc attempts to refine Tony’s rougher edges – to employ a common euphemism for racist and sexist diction – and teach his white driver life lessons. Don endures his own trauma along the way, but such moments accent Tony’s emotional journey. Even when police and locals accost Don, he cares more about Tony’s knee-jerk responses, his development. The film reads like a cautionary tale on how not to approach public service, like volunteering at a soup kitchen to build personal character free of actual concern for those in need of a hot meal. That’s peak privilege.

Of course “Green Book” doesn’t depict Tony as privileged. He struggles financially, while Don is well to do. Tony even tries to declare himself more black than his passenger considering their economic differences. In better hands, the inversion of a white chauffeur for a black artist might be a compelling story. Instead, the film begs viewers to read Tony as sympathetic. He just needs to learn more. Give him a chance. His wife Dolores (Linda Cardellini) dislikes his attitude too, so maybe he’s a good guy beneath that rough exterior.

The most tedious point of films like “Green Book” is a simple “if we just interact more with others, our problems go away.” Well, maybe that’s true in terms of Klan racism, but the less obvious prejudices built into our institutions – good ol’ fashion privilege and systemic obstacles – are far more difficult to visualize on the silver screen. It’s entirely possible. If Aaron Sorkin could make computer coding interesting in “The Social Network,” someone somewhere can easily concoct a complex portrait of contemporary race issues.

But melodrama would need to take a backseat in the process, and frankly popular cinema doesn’t roll that way. When smart sci-fi like “Annihilation” resorts to a Netflix deal in lieu of international theater distribution, American cinema makes clear its preference for superficial stories. And while #MeToo and #OscarsSoWhite started important conversations, naive assertions of witch hunts and overreactions dominate too many insider stories.

Even worse, critics and the industry continue to reward bad behavior. That should be clear when a film like “Green Room” earns five Oscar noms, including best picture. This is a film whose screenwriter, Nick Vallelonga, confirmed Donald Trump’s baseless claim that American Muslims praised the fall of the World Trade Center.

Trump is “100 percent correct,” Vallelonga tweeted at the now president in November 2015. “Muslims in Jersey City cheering when towers went down. I saw it, as you did, possibly on local CBS news.” How can such a flippant stereotyping white privilege, free to opine without proof or obligation to truth, not influence “Green Book’s” deeper meaning?

And just to cover all bases, recent reports that director Peter Farrelly (“Dumb and Dumber”) exposed himself to Cameron Diaz when shooting “There’s Something About Mary” should be the final straw that broke this film’s glaring ethos problem. At what point do filmmakers stop getting a pass? When their films suck?

This is cheap catharsis. While Tony drives Don around, a white couple gets the bird for staring. Then Tony punches a racist cop in the face. These white saviors receive all the praise for their sacrifice, as if taking the path of some resistance is more significant than experiences of the oppressed.

Caring about others shouldn’t be a victory for social change but an obligation for all. And anyone unwilling to admit that – from PC-bemoaning faux progressives to “Black Panther” critics concluding it’s only important for diversity’s sake – would do well to see a number of other more deserving Oscar noms that advance representation and cinematic quality. “BlacKkKlansman,” “Spider-Man: Into the Spider-Verse,” robbed nom “Sorry to Bother You” and of course “Black Panther” all do more for the medium.

Before anyone counters that “Green Book” is based on a true story, please know this dramatization is equally unreal. The filmmakers never reached out to Shirley’s relatives for facts, prompting niece Carol Shirley Kimble to condemn the project in an interview with Shadow and Act. This is a repeat of “The Blind Side’s” revisionist history lesson. So while the Oscars might look a little less white this year, awarding “Green Book” is merely rewarding the same old dated stories racist Hollywood deems refreshing.

Head to Lake Arrowhead for a cozy Valentine’s getaway

Program develops a lifelong love for reading in young children