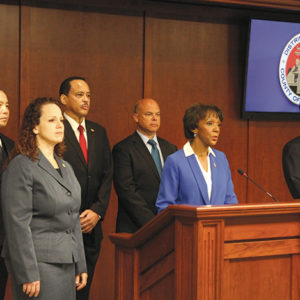 “Our great diversity attracts more than our share of people seeking to manipulate and cheat some of our newest residents out of their hard-earned money,” Lacey said. “As a result, many of our neighbors may be more likely to become victims of fraud and other financial crimes due to their cultural backgrounds and economic situations.” Everyone, regardless of their immigration status, deserves to be protected against crime and to receive justice when they have been victimized. I will aggressively prosecute anyone who preys upon another person because of their language, cultural differences or their residency status.”

The Notario Fraud Unit prosecutes cases involving immigration fraud and the unlicensed practice of law by people who often collect high fees from victims without delivering services. The term “notario” is often used interchangeably with “attorney” in Latin American countries. In California, it is illegal for immigration consultants to call themselves “notaries” because it implies that they are licensed attorneys.

The unit addresses issues affecting the Latino population as well as all other communities representing different cultures, languages and backgrounds. The need for a specialized approach is particularly necessary because more than one-third of the county’s 10 million-plus residents were born outside the United States, according to the latest U.S. Census Bureau data.

The district attorney’s office has obtained convictions in numerous major notario fraud and immigration scam cases in recent years. Defendants convicted include Romina Aida Zadorian, 49, who claimed to be an attorney or government worker and charged her victims for immigration services they never received; Gregory Chavez, 55, who posed as a law enforcement officer and promised the families of immigration detainees that he could get their loved ones out of custody for a price; and Augusto “Tito” Gonzalez De La Cruz, 58, who claimed to be an immigration attorney and promised clients that he could expedite the processing of visas, resident alien cards and citizenship petitions.

Anyone who believes they may be a victim of immigration fraud are encouraged to call the Notario Fraud Unit at (213)257-2450.