Craft in America show to focus on works from ‘California Visionaries’

The Craft in America Center will inaugurate its newly designed gallery with a landmark exhibition of over 40 historic key works by many of the most influential and innovative Californian craft artists from the mid-20th century. 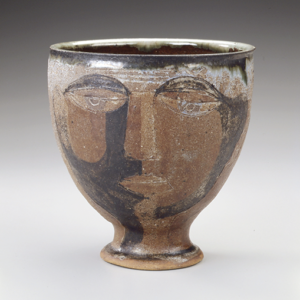 An untitled work by Marguerite Wildenhain is part of a new exhibition at the Craft in America Center. The gallery will show more than 40 pieces of art from the Forrest L. Merrill Collection of Californian artists from March 2 to May 4. (photo by M. Lee Fatherree/courtesy of Craft in America)

Spanning ceramics, metal, wood, fiber and glass, the objects in “California Visionaries” reflect the ingenuity and the birth of studio craft.

After World War II, California became an especially important place for artists who placed their focus on craft-based media and processes.

Lured by climate, geography and an inherent spirit of openness, artists who made the state their home found that they were unbounded in their pursuits.

Numerous college and university programs were established in schools across the state offering unparalleled training in fiber, ceramics, metal, glass and wood.

California became a hub for creative production and artistic investigation.

Merrill’s collection includes some of the finest examples of works made by revered Californian craft pioneers and visionaries over the past century.

Since Merrill acquired his first work of art in the 1960s, he has taken a visionary approach to collecting in seeking out technical innovation, subtlety and material mastery.

Merrill has supported the limitless possibilities of craft and formed deep friendships with the artists who create these works.

For him, the art and artist are inseparable and he nurtures the artists whose objects he discovers. One such artist is Bay Area resident Kay Sekimachi, who considers Merrill a mentor and a friend.

Sekimachi, whose acclaimed experimental work led her to invent complex on- and off-loom weaving techniques, will be featured in this exhibition.

This exhibition will celebrate Californian visionary artists who shaped the future with a far-reaching commitment to expand craft, break barriers and forge new visions all their own.

The exhibition will run from March 2 to May 4. The opening event will go from 4 to 6 p.m. March 2 and will include a Q&A with Merrill at 4 p.m. and a reception at 5 p.m. RSVP at rsvp@craftinamerica.org. The Craft in America Center is located at 8415 W. Third St. For information, go to craftinamerica.org.

VINTAGE: Going green in the days of black and white

‘How to Train Your Dragon’ ends adequately, not quite amazing