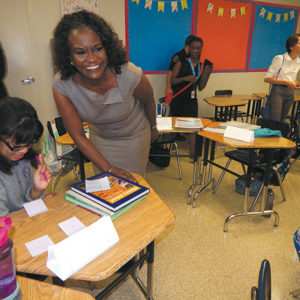 King was the first black woman to lead the LAUSD, serving as superintendent from January 2016 through June 2018. She went on medical leave in September 2017 and was replaced by interim superintendent Vivian Ekchian, who served until King’s official retirement last June.

“Words cannot begin to describe the sorrow we feel, the love we shared with and for Dr. King, and the lasting impact she had on our communities. Her dedication to uplift every student, family and employee within Los Angeles Unified was second to none,” read an LAUSD statement. “As a Los Angeles Unified graduate, parent, life-long educator and the first African-American woman to lead the district, Dr. King was truly an inspiration. She was a collaborative and innovative leader who broke down barriers to create more equitable opportunities for every student. Her warmth, love and generosity transformed countless lives and left a legacy that will continue to impact us for generations.”

“Dr. Michelle King’s life and career encapsulated what it means to be an Angeleno: excellence, kindness, integrity, service above self. She devoted her entire professional life to students in Los Angeles, and led our school district with all of the passion, skill and determination that it takes to be a powerful fighter for young people and their dreams,” Garcetti said in a statement. “Michelle’s extraordinary achievements – record graduation rates, putting higher education within reach for all families and creating new opportunities for our kids to be on pathways to careers – should inspire each one of us to be part of the mission to make L.A.’s schools the best in America.”